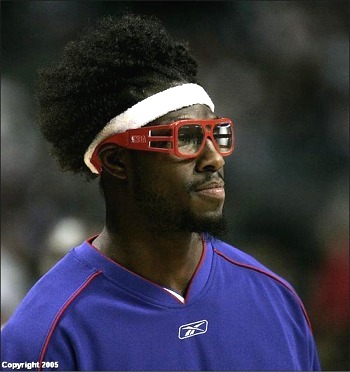 It's been another rough season in Detroit. The Pistons are losers of 11 of their last 13 games, are languishing near the bottom of the Eastern Conference (1 game in front of cellar-dwelling Washington), and have the third worst efficiency differential in the conference.

*Mortifying side note: the Hornets average almost an entire point less per 100 possessions than Detroit. Yep.

Some players have stepped up, however. Ben Wallace has his highest defensive rebound rate in five years. Charlie Villanueva is taking more than 7 threes per 36 minutes, the seventh highest rate in the league (side note: I'll give anyone that guesses the league leader in threes attempted per 36 minutes (without looking it up! honor code!) five bonus points for tonight's jersey contest. Minimum 15 games played. Leave your guesses in the comments.)