You know that feeling where you try to sneeze for like an hour, but can't, and then you finally do? This was like that. Times a million.

How awesome was that game? Let us count the ways.

1. Chris Paul and Deron Williams played minimal roles. I hate how people make this matchup all about these two guys. Yes, they're the two best players on both teams, and yes, it's an awesome point guard battle. But overall, Utah's historic dominance over New Orleans has been just as much a function of the matchups across the floor, if not more. I'd love to see a game where Paul and Williams go off for 30 and 15 each against one another. At the same time, a game dueled out by their teammates (and one in our favor to boot) is just fine by me.

2. David West did his work early. When he had open shots in the first half- especially the first quarter, he stepped right into them and knocked them down. We've seen West shy away from open shots in the past, step into the hesitation move, and eschew shooting it altogether. Tonight, none of those things happened.

3. The Hornets pushed the pace. The final possessions count remained relatively low, but for one quarter, the Hornets ran it down the Jazz's throats. This quarter was, of course, the third period. New Orleans used a season high 29 possessions here, scoring 31 points and allowing just 21. While the offense wasn't particularly efficient, the high pace in the quarter played a key role in running the Jazz out of the building.

4. The Hornets scored 100. The last time New Orleans scored 100 points was more than a month ago, against Cleveland. That game happened to coincide with the start of our horrific skid.

5. The rebounders dominated the glass on both ends. New Orleans has been an elite defensive rebounding team this year, so the 85% rebound rate we posted tonight doesn't come as the biggest surprise in the world. But the Hornets also got after it offensively, something we haven't seen this year. David West grabbed 4 offensive rebounds, Jason Smith got 3 off the bench, and even Marcus Thornton contributed 2.

6. The bench played extremely well. With 37 points on 30 shots, the Hornets' bench outscored the Jazz bench by 15. Jarrett Jack contributed 5 assists with 0 turnovers, Jason Smith put in two loud blocks, and even Willie Green's 1 for 7 night couldn't spoil the fun. 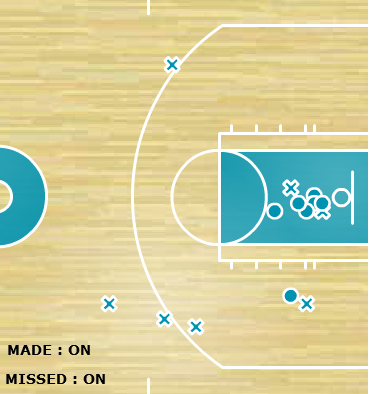 9. The offense wasn't too shabby either. Basically every Hornet outside of Willie Green had an efficient night. Chris Paul scored 11 on 11. Belinelli had 8 on 7. Ariza had 17 on 14. West had 21 on 8 (!). Okafor put in 4 on 3. Thornton had 19 on 10. Smith had 6 on 5. And Jack had 10 on 8. The Hornets ridiculous offensive rebounding (they grabbed almost every other miss) played a huge role, but guys were working for good shots all game long.

10. Marcus Thornton! 19 points in 23 minutes, 5 rebounds, 2 steals, and plenty of activity on defense. $nave summed it up best with the following twattage:

snavetrebor Snave
Thornton is a one-man wrecking crew, using him with Paul and West is like playing with a cheat code.
from Long Beach, MS