Share All sharing options for: Hornets 94, Kings 91: That Was Kind of Awesome

First off, if you want a real recap of this game, check out RedHopeful's, right below this. This one is for the less cultured/more easily entertained amongst you.

I missed watching the game live, so this is more live blog than recap.

There might be links maybe later in the day. Perhaps.

Also that Jersey Contest update I was promising.

/Another line to make the text as big as the picture

/My work here is done

11:20 - David West on the low left block runs a give and go with Marco Belinelli. The number of plays directly involving the two players (passing to each other, screening for each other) has been minimal, so already a nice wrinkle to start.

10:48 - Belinelli takes the feed from CP at the right wing travels. First travel that's been called on him in such a situation this year. He's consistently been toeing the line as far as putting the step down before dribbling.

9:15 - DeMarcus Cousins makes his third shot on three attempts. Kings announcer (this must be the legendary "Peaches" fellow they always talk about at Sactown Royalty): "The big fella has got the nets, uh, tingling!"

7:50 - Belinelli for three from, like, 30 feet. Italian flags run by on the sideline. Good compromise between retiring the heads for Peja and keeping the tradition for the new torchbearer. Well done, whoever was in charge of this.

5:10 - Right as I go to put some Tyreke Evans related snark on paper (ideas: This guy Rekes!! or The Giants were lucky it wasn't David Tyreke!! or ... should I stop now? I should stop now), Tyreke scores on a jumper and a driving layup.

4:59 - Approximately ten seconds later, Peaches: "He is REKING some havoc out there." Yep.

4:17 - Did you know Donte Greene and Jason Thompson are "good buddies" and "like to hook up"? Sure, these things were said in the context of an unguarded alleyoop, but trust me it's much funnier this way.

3:10 - Willie Green checks in. Okafor immediately sets a moving screen. But they play that one Phoenix song going to break, so all is well.

3:10 - All Star Game commercial plays. Which reminds me: I'm going to be at the ASG with credentials (probably). I'm not one for gratuitous fist pumping, but as they say, Carpe Diem. For those not as culturally immersed as me, that roughly translates to Carp God. You really gotta hear it in the original language though. It loses so much in translation.

2:00 - Speaking of Carp Gods, Willie Green hits a three pointer at the shot clock buzzer. What. Just. Happened. Marcus Thornton is never going to get in this game now!

2:00 - Okay sorry, that was just an artificial attempt to build dramatic irony under false pretenses. My b.

1:08 - Is it just me, or are all the players just, like, yelling a lot this game? It's like a team of Kobe Bryants versus a team of, I don't know, Rob Zombies.

0:04 - Tyreke Evans does something crazy. Again. More good music to cut to commercials. This reminds of that time Scott Schroeder picked the arena music at Summer League, except the exact opposite.

9:26 - Somebody apparently spilled their drink on the floor. The ballboys run out to clean stuff up at the free throw line. What exactly happened? How do you spill your drink that far? Does this mysterious spiller of drinks have a 7 foot wingspan or simply a propensity to launch things forward whilst losing control of them? Alas, the world will never know. Off to commercials, where Hyundai urges me to "think about it." Oh, I am most definitely thinking about it, Hyundai.

8:32 - Kings announcers seem completely stumped as to who the Hornets' all time career leader in assists is. This franchise isn't that irrelevant, is it?

7:30 - Macus Thornton aggressively finishes a layup. Have you every wondered if other people (in this case, the coaching staff) are watching a different game than you? As in, seriously wondered?

6:01 - Commentator A and Commentator B debate whether getting hit in the face with a basketball will (a) wake you up, or (b) put you to sleep. I am momentarily at a loss for words until Commentator B neatly sums up the proceedings by noting that "Carl Landry has that pebble... pebble look on his face." Wait just kidding, my words are even more lost now.

5:38 - I bet you didn't know that Ashton Kutcher is a highly capable driver of large cruise ships.

3:40 - Chris Paul jumps a foot over the head of Samuel Dalembert to snag a rebound. Very cool and all, but surely there are less gasp-inducing methods of rebounding.

0:16 - Jason Smith and Trevor Ariza kick the ball to each other three times, under the hoop. The challenge has been issued, Iniesta and Xavi.

0:00 - The Hornets are down by 16 I think. I'd tell you more about how various players have looked, but sadly, I've mostly been ignoring the game to write this only-mildly-humorous-at-best commentary.

9:40 - Tyreke Evans burns Marco Belinelli en route to a floater in the lane. Wasn't this why we got that one guy, Trevor Arenas, or whatever?

8:47 - Kings go up by 23. This is normally where I'd start throwing things/publishing depressing in-game recaps. But for some reason, I am filled with a strange calm!

8:22 - Chris Paul drives for a layup; David West yells "And one!" on his behalf, only to see Chris Paul yell it even louder.

6:52 - I just attempted to vigorously rub a speck of dirt off my computer screen, only to realize it was that one black part of the crown on the Kings logo. Thornton immediately hits a three.

4:53- Chris Paul with crazy bounce feed between two defenders to Willie Green on the arc. Brick. This is like setting Symphony No. 9 as your ringtone.

3:31 - Thornton does a hesitation stutter-step crossover in the lane and picks up a three point play. 14 point game.

11:20 - Thornton's last two plays have been an airballed 10 footer and an out of control charge. Beginning to wonder if all the "MT was awesome!!1" tweets aren't all part of a very elaborate practical joke. 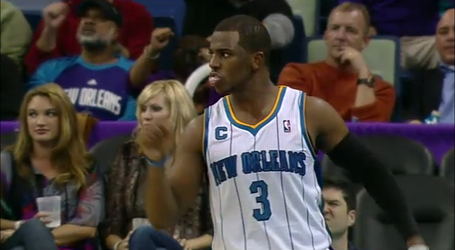 9:25 - Willie Green with the rainbow pull up from midrange. As much as I dog the guy, he has that shot on lock down. DeMarcus Cousins responds with another travel on the other end.

8:52 - Lost in all the lols: I just realized that Monty Williams kept Paul in until the 9 minute mark in the fourth quarter. Perhaps it was entirely motivated by being down 20 to the... Kings, but hey, it's definitely new.

5:01 - Kings broadcast does a cool thing where camera walks up the floor to Belinelli taking a free throw. Between the music and the shots, this has to be the best produced local-TV game I've ever seen.

2:55 - Thornton puts New Orleans ahead with a difficult floater. Kings turn right back to Cousins. Who, obviously, travels.

0:40 - David West goes to the line and misses both free throws. After a Tyreke Evans play, the ball comes to DeMarcus Cousins. U ALRDY KNO. 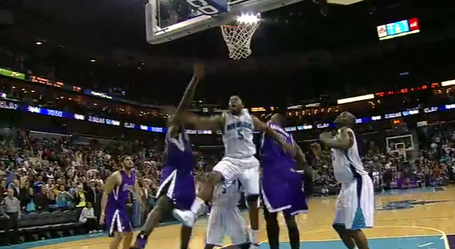 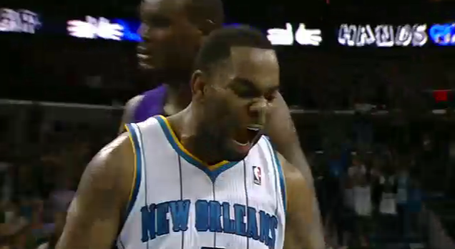 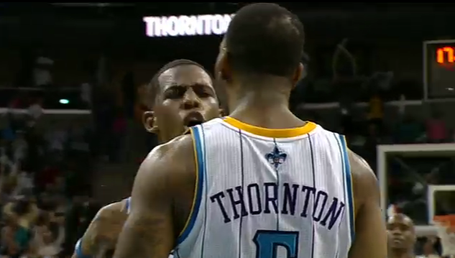 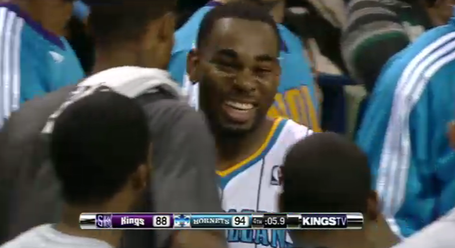