The Stats So Far

Share All sharing options for: The Stats So Far

We are 24 games in, and that seems like a good a time as any to look at what each individual Hornet is doing from a statistical standpoint. Consider it a progress report of sorts. [Note: This post is actually only up to date through the first 23 games, as I wrote most of this prior to the Miami game. Apologies for that, but thankfully one game rarely changes much.] 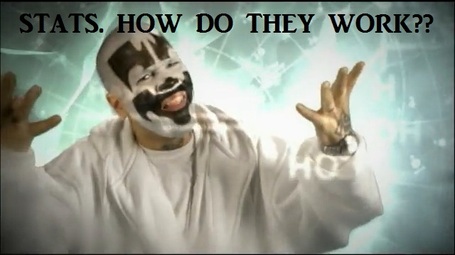 Most of these stats are pulled from Basketball-Reference.com (with the exception of a couple of my own favorites like PTS/FGA and FTA/FGA), and I'm using the same abbreviations that they use. If you don't know what something means, check their glossary.

Also, while I tried to include as much information as possible... the world of basketball statistics is a vast one. I didn't include things like shot locations or any plus/minus figures, so if you'd like to look into that sort of thing I highly recommend visting 82 Games. Now, on to the stats:

ANDERSEN: The sample size here is so small that there's not a lot you can take away from these numbers. They are awful, that's for sure, but they'll almost certainly improve to some extent as the season goes on if Andersen continues to get playing time.

ARIZA: When Ariza was first traded from Houston to New Orleans, many believed he would be able to return to the high-efficiency style of offense he displayed in Los Angeles. That hasn't happened. On the contrary he has continued to regress offensively. He posted an Offensive Rating of 99 with Houston last season. This season, as you can see, his ORTG is down to a horrible 93. He is, as always, doing well on the defensive boards and playing solid defense. His defensive rebounding percentage of 17.2% is fifth on the team, his defensive rating of 100 is tied for fourth best on the team and only Chris Paul has more steals. That said, he could have so much more value to the team if his offensive production wasn't such a mess. From 2007 to 2009 Ariza was stellar offensively, posting ORTG numbers of 121 and 112. Because of that history, I'm still holding out a little hope that he can return to similar numbers. He can start improving by not taking 4.3 Three-Pointers per 36 Minutes, as he's only making them at a 30% clip.

BELINELLI: Belinelli is having, arguably at least, his best year as a pro. His ORTG and DRTG numbers are both career bests and offensively he's never been more efficient. 1.27 points per shot is a career high for him and it's one of the best marks on the team. He's also shown excellent ball control, turning it over on only 9.8% of his possessions. On the other hand, his rebounding is down, his shooting percentages have been plummeting as of late and his assists are way down. More on this later when we get to Willie Green...

GRAY: Two games and a total of 21 minutes is a ridiculously small sample, but that's all Gray has been given this year. However, if you combine these numbers with the numbers from Gray's 24 games as a Hornet last year you see something noteworthy. The sample size is still small (26 games), but nonetheless the numbers suggest that Gray has improved considerably since his time with the Chicago Bulls. Sure, Gray is slow, he fouls too much, and he's turnover prone. He's also an excellent rebounder who plays solid defense and can score in very limited but highly efficient ways. Why Mbenga got the nod for so long is a mystery.

GREEN: Willie Green is having another Willie Green season. The numbers are comparable to most other Willie Green seasons. There are two noteworthy items here though. One, while his DRTG is better than its been in years, his ORTG is worse than its been in years. Second, his AST% is way, way down. If you remember, so is Belinelli's, and when we get to Jarret Jack you'll see that his assist numbers are down also. The question then becomes, is it the chicken or the egg? Is the Hornets offense struggling because the backcourt, aside from Chris Paul, is having trouble with ball movement? Or is the backcourt not getting assists because the Hornets offense is struggling and no one is hitting shots? Thoughts?

MBENGA: Mbenga's Defensive Rating looks good. Everything else? Quite dreadful. Lots of fouling, ridiculously poor floor percentages and a very low Offensive Rating of 79. He does have value as a defender for small stretches, no question, but Gray looks to be the superior option.

JACK: Jack has had a really rough start as a Hornet. He is yet another Hornet with a very poor Offensive Rating. It's mostly due to his brutal floor percentages and as mentioned above, decreased assists. The good news is that most of these numbers are out of sync with his career averages, so expect them to climb as the season goes on.

MENSAH-BONSU: Early on it looked like Pops might play a small part in the regular rotation, but he started racking up DNP-CDs after the first couple of weeks of the season. It's not hard to see why. A turnover percentage of 40.0%? As many fouls per 36 minutes as total rebounds? Wow. Of course, the small sample size caveat once again applies. Personally, I'd like to see Pops get another shot, primarily because he's an excellent rebounder.

OKAFOR: For the first couple of weeks of the season it looked like Mek was on track for a career season. That turned around quickly and in many ways this is now looking like one of his lesser seasons. The PER of 14.5 is a career low, and so is the Offensive Rating of 105 if you throw out his injury-limited 2005-2006 campaign. He's also turning the ball over more, assisting less, and once again performing very poorly from the free throw line. On the other hand, he's still rebounding at an above average rate, his shot blocking has improved and his Defensive Rating as it currently stands is a career best. The decline has been primarily an offensive decline, which corresponds well to this Hornets team as a whole.

PAUL: At first glance, Paul's stats might not look as awe inspiring as they have in previous seasons. Look a little closer though, because for the most part they are. Paul is leading the league in both PER and Win Shares per 48 minutes, and doing so by comfortable margins. He's also having his best year defensively. 3.3 steals per 36 minutes is simply insane, and his DRTG of 96 bests his previous career high by a full 7 points. Yes, I would like to see Chris Paul shoot more. Paul's 1.48 points per shot is best on the team by a wide margin (not counting Aaron Gray and his 2 game sample), yet the horribly inefficient Trevor Ariza is taking nearly as many shots as Chris. That needs to be rectified. Still, there's no question that Paul is having another MVP-quality year. He continues to cement has status as a truly singular player in the history of the NBA.

PONDEXTER: Quincy doesn't look very good statistically. In fact, he looks well below average. He is shooting nice percentages and avoiding turnovers but otherwise there is nothing special here. That said, I wouldn't read much into that. Quincy is a rookie who has played only limited minutes and is quite obviously still developing. The stats may not mean too much at this point. We shall see.

SMITH: Remember when it looked like Smith was going to have a career year? It doesn't look like that anymore. He's just not getting that open midrange jumper as much as he was early on, and as a result his contributions have become more minimal. He still hustles, but statistically he's basically the same player he was the previous two years, and that means he's a well below average one.

THORNTON: Marcus' numbers are down all across the board, save for defensive rebounding, which has seen a significant jump. Otherwise, these stats don't look like they belong to the same player as last season's Marcus Thornton. Does it mean anything? It's hard to say, but I don't think so. For most of the season, Marcus has either been inactive or been given spot minutes with a short leash. Is it really fair to expect Marcus to produce under those conditions? In an interview with SLAM a few weeks back Monty Williams said that he believes most players will improve when they are given consistent minutes. For whatever reason, he isn't applying this philosophy to Marcus. It's going to really suck when Marcus drops 35 on the Hornets in a few years wearing a Nets uniform or something.

WEST: West is, like Chris Paul, playing less minutes so his basic per game numbers look a little depressed. However, he's actually having what might be his best year as a pro. West has significantly increased his efficiency on the offensive end. The 1.27 points per shot is the highest number he's ever posted in that category, and the same can be said for his TS% and EFG% numbers. He's also posting a DRTG that's better than any season since his rookie campaign. West is also fouling a lot more this year, which is fine because I think its indicative of his increased defensive contributions. Unfortunately, his defensive rebounding numbers continue to slide, so despite a small uptick in offensive rebounding he's rebounding at basically the same rate he did last year. Nonetheless, both PER and Win Shares count this as West's best overall campaign so far. Of course, its' still really early, so we'll see if he can keep it up.