I'm not entirely sure that the English language deserves to be tortured (sorry, enhancedly interrogated) by being forced to describe this game.

I hesitated for a second before going with a 2nd mid-game recap in about four games. If you recall, similar events unfolded against the Spurs. These were, after all, the 76ers. A comeback? Maybe? Please? Nope. Unfortunately, these were, also, the Hornets.

The offense is an absolute, unmitigated joke. Monty Williams and Chris Paul can talk all they want about how defense is the identity of this team. Missing the playoffs or getting swept by an average 30 point margin by San Antonio/Dallas/Los Angeles will also be an integral part of this team's identity if we keep this up.

It's not just that we missed shots. Yeah, sure, some guys missed shots that they might make at home or during a non-11 AM start, or whatever. That wasn't really the issue though. The primary reason we sucked today was the same reason we've sucked all season long- the offensive play calling. I'd call the play calls "bad," but that would imply that they existed. Most of the plays this team runs are so bad that they devolve into a Willie Green/Trevor Ariza isolation as soon as the opponent plays even the remotest semblance of defense for a few seconds.

When you're not making shots, you attack the rim. You learn this in, like, third grade. Now I'm not saying the Hornets or their coaching staff are second graders- because, come on, Chris Paul would be the world's best high school biology teacher, forget elementary school- but, okay, maybe I am saying that. Their second quarter shot chart is all kinds of disgusting: 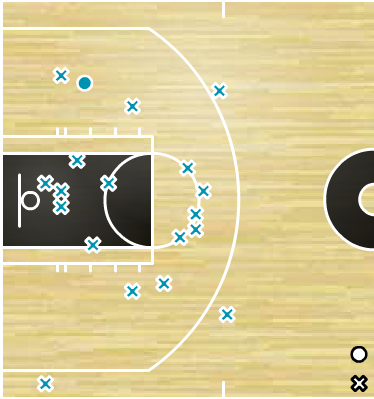 And here's another criticism. It would be one thing to fall in love with the jumper when you have a Richard Hamilton or Kobe Bryant on your team. When Trevor Ariza, Willie Green, and Jarrett Jack are your primary chuckers of long twos, that's something else entirely. I've harped so, so many times on the inefficient distribution of shots taken by the team. It's not going away any time soon.

In any case, we've really perfected the art of the blowout. I don't think any team in the league can match our commitment to the fine craft of letting an opponent go up big, never really coming close to threatening the rest of the way, and randomly committing frustration fouls and technicals late in the game.