The Hornets wrapped up their first serious road trip, and Monty Williams returned to his old stomping grounds to stomp some more.

It's kind of stunning that the Portland Trail Blazers finished with 78 points tonight. Through one quarter, they out-executed us in nearly every facet of the game (save rebounding). They set good screens, moved the ball into open looks, and forced turnover after turnover. After one, Portland sat at an offensive efficiency of 1.50 points per possession. Thankfully, it was all downhill from there. In quarters two through four, the Blazers' output was nearly halved- 0.76 points per possession. And as great as it was to see the Hornets lock down defensively, it felt like the Blazers' offense was equally culpable for the the team's downfall.

At the end of the day, it was really rebounding that won this game for us. New Orleans collected 86% of all Portland misses while the Blazers snagged just 65% of Hornet misses. That's a monumental disparity. And while the Hornets turned the ball over twice as often as the Blazers, they also doubled up Portland on free throw opportunities and easily out-shot the Blazers from the floor. Outside of the turnovers, this was as complete an effort as we've seen from New Orleans this year.

You can count on your fingers the number of players in league history that could thoroughly dominate a game in which they took 6 total shots. Chris Paul is obviously one of those players. Yes, he'll be the first guy to beat himself up over his 5 turnovers (literally). But 16 points on 6 shots to go with 13 assists and 6 rebounds? That's getting it done. I often caution people against using single-game +/- as a measure of individual performance, but Chris Paul's +27 is a real indication of how well the team played with him out there.

The preview curse strikes again. Before the Utah game, I wrote about the Jazz's rebounding struggles before they proceeded to dominate the glass on both ends. Before this game, I complained about Trevor Ariza's and Willie Green's offensive efficiencies. Tonight, they combined for 37 points on 22 shots. 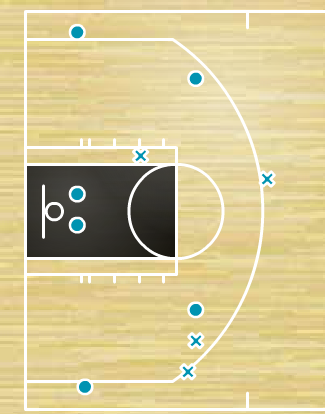 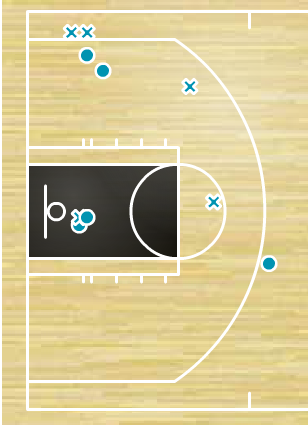 I'm not sold on either of their shot charts. That's Bill's on the left and Trevor's on the right. Of their 22 field goal attempts, 15 came via the jumper. Billiam's were far more contested than Ariza's, but I don't like shot selection in either case. The shots went down tonight, but so far this year (and so far in both players' careers) they haven't gone down with such regularity. Neither Green nor Ariza had much success on Brandon Roy on the defensive side.

Via Popcorn Machine, the flow for this game was highly representative of the possession/efficiency stats from above:

Interestingly, the 7-2, 17-2, and 18-6 Hornet runs you see listed were all made when the starters were introduced or re-introduced for the bench (with the re-introduction of Portland's starters coinciding more or less). The 12-1 run was made by a Paul-Green-Ariza-Smith-Okafor 5 man unit.