[MrWayneKeller's front page debut for At the Hive. Enjoy. -Rohan]

First things first, a very happy Thanksgiving to all the ATHers.

We New Orleans Hornets fans are, for the most part, a loving bunch.  When the team signed Jannero Pargo this past offseason, it was met with a pretty lukewarm reaction.  When the team eventually traded for Jerryd Bayless, we basically let out a collective shriek of excitement.  Even moves for guys like Mustafa Shakur were met with positive reactions.  This past week, the Hornets finally moved Peja Stojakovic's large, expiring contract and moved Bayless along with it to acquire Jarrett Jack in a move to finally stabilize the second unit's backcourt.  Reaction seemed to be split initially under whether or not the team could have gotten more for Stojakovic, but the bottom line is that they upgraded the roster for the short term and long term with the move.  Jack doesn't bring a great reputation with him, he's never been to the postseason in his career and one of the most frequently used comments during the trade was how he was friends with Chris Paul, but Jack has produced for three different teams for the duration of his career and showed the ability to contribute with heavy minutes or in a reserve role.  His ability to play either behind or alongside Chris Paul, his tenacious intensity on defense and a willingness to win and adapt make Jack the perfect back-up to Paul. 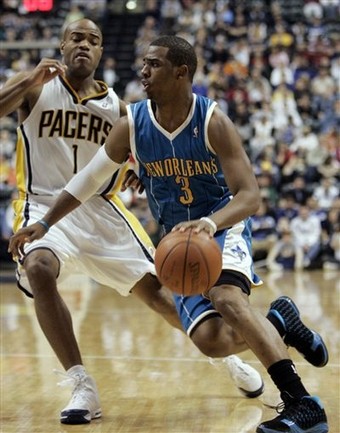 However, the addition of Jack didn't come without questions.  For one, he had an unusually high turnover rate for the beginning portion of this season while with Toronto and also was averaging an abysmal 16.7 percent on 4 for 24 shooting from behind the three point line.  Add in to the fact that there are questions about his speed and ability to keep up with the quicker point guards in the league, and there are plenty of doubts as to whether or not he'd be able to step into his role seamlessly.  However, Jack had experience playing with Monty Williams for three years in Portland when Monty was an assistant and his work ethic and leadership are intangibles necessary on championship teams that you just don't quantify with numerical averages.  Seeing as how so much was expected of Jack so soon and how quickly he was put into the lineup, we can take a quick look at how he did individually in his first two games after the jump.

First Game, @ Los Angeles Clippers: I've tried my best to erase that entire Clippers game from my memory, but I've been asked to recap Jack's performance in it.  So for literary purposes, I went back and paid close attention to the game when Jack came into the lineup and endured so for your viewing pleasure.  Given how it was questionable whether or not Jack would be able to join the team in time for the Clippers game, the fact that he played and he played admirably is a fantastic sign moving forward.  Two days after being traded to the team, one day after he joined the roster, Jack was finishing the game with Chris Paul and David West and received the second most minutes of any reserve on the team.  The fact he was able to gain Monty's trust so quickly is probably a result of their time spent in Portland.

Onto how he actually performed, Jack was very efficient.  He scored 12 points on 8 shots, added 4 assists and 3 rebounds in 16 minutes of action and even made two crucial free throws down the stretch in the losing effort.  One thing Peja did that was taken for granted was his ability to almost be automatic from the free throw line in critical situations during the closing minutes of a game.  Jack may not be as efficient from beyond the arc as Peja is, but he, along with CP3 and David West, is a reliable option at the charity stripe at the end of games.

But one thing should be noted that not a lot of people had talked about.  When Bayless first joined the team, much was made about his early struggles not being indicative of his ability to fit in because he had just joined the team and needed time to gel with his teammates.  Jack's a veteran.  He's eager to win.  Jack had one walk through with the team and played as if this had been expected of him since August.  It should provide hope that there's even more to come from Jack in the future.

Second Game, @ Utah Jazz: Overall, the entire Hornets team just played a really bad game against Utah.  Jack was no different.  However, I'm more inclined to give Jack the benefit of the doubt considering his adjustment to a new team than I am the other players who just performed at a very poor level physically and mentally.  Jack's performance in the Utah game is about what most of us were expecting from his debut against the Clippers.  In this game, Jack only got 13 minutes and looked passive out on the floor.

He shot only 1 of 4 in those 13 minutes, although he did make his two free throws, and only wound up with 4 points in the game.  Also, the team went with Willie Green alongside Paul during the crucial moments of this game, going away from the Paul and Jack combination that they used in the Clippers games.  I wouldn't say this is any indication of Monty's future plans with Jack, more so an indication that he's not yet grasped the entire system.  Overall, he had a much more limited role and involvement in the Utah game than he did in the Clippers game, so there's not much to really go off of.

Out of these two games, I can't really say that Jack will or won't develop the ability to play alongside Paul.  His ability to run the offense, play adequate defense and knock down the occasional jump shot are all something that can plausibly happen here in the near future.  Just because he didn't show the ability to do so initially has no bearing on his overall ability to deliver in those departments.  I still believe Monty's long term plan is to finish games with Paul and Jack on the court together, as seen in the Clippers game, and when Jack becomes more comfortable with the team we could see that happen.  Unfortunately for him, he showed up at a moment where the Hornets lost two very bad games; one to a bad team and one with a bad performance.  Hopefully both the Hornets and Jack can continue to get better and, obviously, both would be better off for it.