The trade that seemingly materialized out of nothing and has had its validity questioned from every angle appears to be complete. Here's what it looks like:

New Orleans figures to pick up a ~$2 million dollar trade exception in the process. Peja's contract will be moved for Jack, Andersen, and Banks, and the Bayless move will be facilitated by part of Toronto's Chris Bosh trade exception. The Hornets won't get the much larger trade exception that was initially reported (and is still being reported by Yahoo! Sports).

The Expiring Contract of Peja Stojakovic

Let's get this one out of the way first. Specifically, let's address a myth that surrounds PageLEC (which stands for Peja LaFrentz EC. Obviously).

Hornets fans have been eyeing Peja's contract for a couple of years now. There's always been a sense that the team could, if they wanted, move him for a valuable piece. So, at a glance, using Peja's deal to facilitate a backup point guard swap seems mildly underwhelming. After months and months of buildup, the feeling that Dell Demps threw away an asset is understandable. But it's also wrong. Expiring deals are common in today's NBA landscape. Too many teams have either large expirings or large trade exceptions. Deals for players like Carmelo Anthony or Andre Iguodala would not be overly contingent on Denver or Philly getting cap relief back because multiple teams could offer similar ending contracts.

The Hornets would have had to trade away at least Marcus Thornton, if not multiple future picks. Thornton's not playing now, but that doesn't mean he won't play again this year. When he does get back on the court, we already know he'll be an extremely valuable member of the bench. Additionally, any Peja deal would have required the Hornets to take back a player with multiple years left on his deal. Even if we forget the Shinn ownership situation for a second, committing large amounts of money now would severely limit our flexibility in Summer 2011 and 2012. With a new CBA on the way, flexibility is on the forefront of every (good) GM's mind.

It's also important to mention that both Marcus Banks' and David Andersen's contracts expire this year. Together, they add up to about half of Peja's deal. The Hornets may no longer be able to trade for an Iggy or Melo at the deadline, but they can still pick up a quality big through their expirings. At the end of the day, the value of Peja's contract was overstated.

As far as Peja himself? He was clearly showcased the last few games. His defensive rotations had been the worst on the team outside of Jerryd Bayless (more on that in a bit), and we now have an explanation as to why he was out there. Can he still shoot the ball? Absolutely. But he's as one-dimensional as they come. As we're learning quickly, Monty Williams doesn't play one-dimensional players.

I won't lie. I was probably the most excited person on here when we traded for Jerryd Bayless. I loved his aggressiveness with Portland. For years, the Hornets had lacked an attack minded, driving player alongside Paul. I thought Bayless would be the guy to fill that void.

This year, two things have happened. First, New Orleans' attacking options have expanded significantly. Ariza may not be playing well right now, but he's routinely attacked the bucket in the past 5 games instead of settling for the jumper. Marco Belinelli has been a revelation with his driving ability. Suddenly, aggressive driving isn't as sorely needed, especially when accompanied by the turnover rate Bayless was sporting.

Second, Bayless' defense has been awful. Really, really awful. He's struggled to stay in front of every assignment presented him. I'd say he's been far and away our worst defender. Obviously, that's not something that was going to fly under Monty Williams.

Jarrett Jack is clearly the better point guard right now. Jack turns the ball over too, but he generally makes better decisions on the floor and plays under control. He can shoot the ball, and he's started over 100 games the last three seasons. Bayless may have more long term potential, but it's unclear whether that potential can be achieved at the lead guard position. Jack also brings much, much better defense. There's no doubt that we improved our point guard play today.

The 1st Rounder We Sent to Portland

While most will agree that Jack is an upgrade over Bayless, the draft pick we traded for Bayless is more a point of contention. But it really shouldn't be.

Even if the Hornets' current pace slows a little, it's looking more and more likely that they'll have a draft pick in the 20's. Let's go conservative and say that New Orleans barely scrapes into the Western Playoffs. This would put them at around the 18th-21st overall picks. Via this post, we know that draft picks in that range are expected to produce between 1.8 and 2.0 win shares in each of their first four seasons. Jack's value the past four years: 4.8, 4.1, 3.2, 4.8. If the Hornets can keep up their playoff pace, Jarrett Jack is clearly more valuable than the pick we sent to Portland.

Throw in the fact that he'll fit right into our defensive schemes, that he's best friends with Chris Paul, and that he replaces Peja as a 40+% three point shooter on our team, and it's obviously worth it. The only real argument I'd make here is that Jack will be paid a little too much ($5 million a year for 3 years) for what he'll play (likely 20 minutes a night). His contract is worth it as a starter and not as much as a backup.

I've said it time and time again: like it or not, this is a critical season in franchise history. Dell Demps can build for the future all he wants, but if the Hornets are lying flat on their faces at the end of the year, Chris Paul's time here could well be done. The Hornets almost need to win a playoff series in 2011. As Blazers Edge's Ben Golliver told me via chat earlier in the day, when you consider that fact, "losing a first round pick to do it isn't the end of the world." I totally agree.

I don't think Marcus Banks will see heavy minutes. He figures to be the third string insurance point guard, and he probably won't get the opportunity to play himself beyond that role. Andersen could see some time over D.J. Mbenga because he's a solid defensive rebounder. He can also knock down the jumper. I'd still love to see Aaron Gray get a chance, of course, but Andersen could give us some valuable minutes

Acquiring Banks and Andersen now means that both players (both expiring) can be flipped again before the trade deadline.

This trade represents great recognition on Demps' part that the value of Peja's expiring deal is overstated and that the Hornets really need stability behind Chris Paul.

I'll end by addressing this tweet from SBN's Mike Prada, who I think makes a fair point: 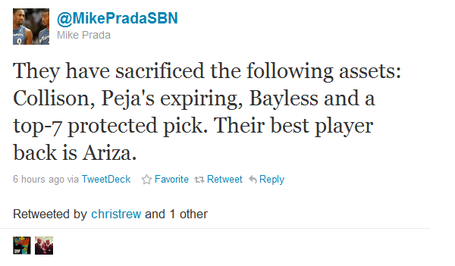 (a) I'd trade Collison for Ariza 100 times out of 100. Collison's role was limited here, and Ariza's defense has been one of the most critical additions to this team. The Hornets' success has been built primarily on their defense; they're simply not a top 5 defensive team without Ariza.

(b) Peja's expiring was overvalued. The only way the Hornets could have received great value back is if they moved Thornton, future picks, and sacrificed future flexibility (which is as large an asset as any of those other things).

(c) Saying the Hornets sacrificed Bayless and a draft pick is a little misleading. They acquired one through the other. Bayless may be more of an "asset" than Jack because he's younger and has more potential, but Jack is the better basketball player. And we're rapidly learning that the "top-7 protected pick" may not be much of an asset at all.

None of that is a knock on Prada's tweet. Demps' perceived mismanagement of team assets is something that naturally follows this wild flurry of deals. My point is that it's not nearly as bad as it looks.

The Hornets improved their playoff odds and slipped under the luxury tax, saving almost $11 million dollars that they can now spend in the summer. They got the best player in the deal. They get another pick and pop option that can rebound too. Quincy Pondexter can now take over as the full time backup 3. And an already stellar defense figures to get that much better.