Share All sharing options for: Game 11: Hornets vs. Cavaliers 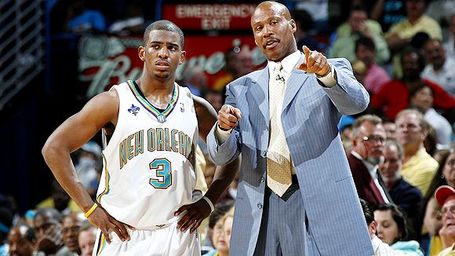 For months now, the Cavaliers' players, their coaches, and their fans have been saying all the right things. Last year was last year. The LeBron James era is over. This is a new team, a new regime, and LeBron James is as much an artifact of franchise history as Craig Ehlo or Brad Daugherty. And maybe they all do really believe it. After all, Byron Scott and other new additions to the franchise have no reason to concern themselves with what LeBron James did or did not bring to the team. But from a fan perspective, it's harder for me to contextualize it. If the best basketball player in the world quit my team on national TV, I'd probably have a hard time shaking it off like it was nothing.

In any case, here we are. Cleveland has outperformed expectations thus far. They stand firmly in the thick of the Eastern playoff chase. It's early yet, but it doesn't seem outlandish that they could beat out teams like the Nets, Knicks, or Cats to that 8th seed. Surprisingly, they're playing faster basketball (92.5 possessions a night) under Byron Scott than we are (90.5 possessions a night) under Monty Williams.

They're not particularly good at anything, but they don't turn the ball over, and they don't foul often. If you wind back the clock a little, you might recall that those are two of the traits Byron Scott established his New Orleans success upon.

Mo Williams and Andy Varejao are both game time decisions for tonight. As you can see above, I give the edge at every position on the floor to the Hornets. If the bench can keep things tidy, we optimally won't see Chris Paul in the fourth quarter tonight.