Two games featuring a differential of a single point- it's fair to say nothing has been decided between the Dallas Mavericks and New Orleans Hornets.

Outside of the "last undefeated" bit, the biggest stories coming into Monday night's game were Dallas' and New Orleans' defenses. Two games later, we've seen four rather on-point offensive performances (two by each team, for the mathematically disinclined). What gives?

The Ball Moves Faster Than You

Anybody that's played basketball at some level has heard this phrase. And if you're looking for the reasons behind the Dallas Mavericks' offensive success against us, look no further.

Those of you that have read my recaps so far know that I've talked about this often, in the context of the Hornets offense. The weakside swing has been one of the staples of Monty Williams' offense. Two players (usually Paul and Okafor) isolate on the strong side (side with the ball). There's motion up the middle, and the shooters spot up on the weak side wing and corner. If West moves up the middle, Ariza normally mans the wing with Belinelli sliding into the corner. If Ariza makes the cut, West takes the weakside baseline with Belinelli shifting to the wing. Paul has the option to hit the cutter who then makes the swing pass, or Paul can take an Okafor screen and switch it the weakside wing himself. (That's a ton of verbiage to describe something that flows so easily, something that has worked like clockwork).

Tonight? It was Dallas that ran the swing to perfection. Give a ton of credit to Jason Kidd. He routinely came off of the strong side screen, ready to fire a strike to the weak side. Many of Jason Terry's open looks in the first game came via this strategy. The weak side swing that Dallas ran to get Terry a three in the fourth quarter tonight (you probably said "crap" the moment you saw the pass leave Kidd's hands) was perfection.

In the eight games leading to the Dallas "series," New Orleans did an amazing job of playing defense. We locked down pick and rolls, played physical with cutters, and brought tremendous help defense around the rim. To sum it up in one phrase: defenders stuck with their assignments.

In the last two games, we saw something entirely new. You can stick with your assignment all you want. At the end of the day, the ball's going to move faster than you. As the ball moves around, it's no longer just about a defender and his assignment; it's about a defender, his assignment, and all the potential areas of the court unlocked by the weakside swing. It'll be interesting how the Hornets take the lessons from these two games and apply them moving forward.

*As an aside, I think it's fairly obvious who the league's finest exponents of strong-weak ball movement are. We play them in 6 weeks.

I won't lie, despite all the history between the Hornets and the Mavericks, Dirk Nowitzki is one of my favorite players in the league to watch. The jump shot is my favorite part of the game of basketball, and when Dirk is on, you get shot charts like this: 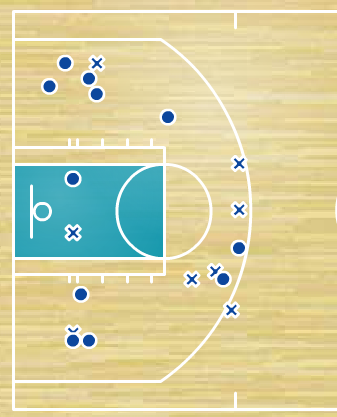 Seriously, how do you guard that? Do you bring the double and allow Dallas' impeccable ball movement to find the wide open guy standing in the corner? Do you deny the shot and allow him to drive? (Answer to that last question is likely yes, but Dirk's game when he puts the ball on the floor is pretty underrated).

Unfortunately for Dallas, "Dirk's Dirk" also encapsulates things like this. I'll never understand why Dirk Nowitzki doesn't school smaller players the way he should. His huge advantage over power forwards and centers is that he can shoot right over them. He's tall, he keeps the ball high, and he actually gets decent height on his jumpers. It seems like this advantage should only grow when he's against a smaller guy. That hasn't been the case in the past (see, anecdotally, his series with GSW), and it wasn't tonight after Monty Williams switched Marco Belinelli onto him during the game's final possessions.

Dirk caught the ball, isolated, three times against Belinelli. Each time, he faced away from the hoop, and each time, he never really turned around. Belinelli seemed to almost be strapped onto Dirk's back, and it inexplicably affected his play.

Keeping in line with a recurring theme of the season: heads up coaching from Monty Williams.

It's funny; I was sitting next to a couple non-NBA fans while watching this game. At some point, one of them started to remark how the NBA doesn't actually matter until February, how each game isn't that serious in and of itself, and how there are realistically only three to four teams that can actually win a title each year. I do agree (for the most part) with all of those points. But right as he was talking, Chris Paul was going behind the back on a fast break, putting it in plus a foul, and turning to the crowd and screaming. And so I wasn't listening.

This matchup was intense regardless of the fact that it's November. And it made me realize: this is why it's so great to follow a team that has Chris Paul and David West on it. These guys battle on literally every play against every opponent. They never take possessions off. That doesn't mean they don't struggle; they do sometimes. But they're always yelling at teammates, yelling at refs, yelling at themselves and trying to be better. Chris Paul and David West kind of pull you in, regardless of whether what's happening around them is good or bad, and it makes cheering for them that much more rewarding.