The Hornets won at the AT&T Center for just the third time since 2002 with another convincing defensive performance. Chris Paul was also involved.

Road back-to-backs inherently provide (generally valid) excuses to fall back on. Fatigue. The Road. Less time to prepare. We can, however, save all of those for some other recap. Tonight, the Hornets played probably their best offensive and defensive game of the young season.

New Orleans is starting to establish that its defense can keep it in games until the offense comes to life. We saw it in against Milwaukee and Denver, and it was even more pronounced against San Antonio. Chris Paul struggled in the first quarter (2 turnovers, 1 assist, 0 made field goals), including throwing the first pass of the game straight to Manu Ginobili. The Hornets converted just one field goal in the final 5 minutes of the first. But all the while, the defense kept pace. The numbers by quarter:

As the offense went from abysmal to good to stellar, the defense steadily tightened. By the time the fourth quarter rolled around (when the Hornets' offense dipped and the defense struggled to contain a Spurs squad fueled by desperation), the lead was insurmountable. We've seen double digit leads vanish in three consecutive games now, but on the flip side, we've eventually managed to protect each one successfully.

It's hard to pinpoint any single reason our bench has been successful. Its front court features two subpar players (Smith and Mbenga). Its offense is predicated on turnover-prone guards creating long jumpers for each. Not one member of the bench is particularly noticeable for his defense. It's an undersized unit, too. There will definitely be games when those jumpers won't fall, and the bench play will look ugly.

I suppose that more than anything, the energy they've brought is terrific. They look to push the ball off turnovers, blocked shots, and even missed shots because they realize that their half-court offense tends to stagnate. They make quick rotations on defense, and Smith, Pops, and Mbenga looked more than adequate against SA's bigs. I still want Aaron Gray activated and taking minutes away from the Smith-Mbenga duo, but for now, this has somehow worked.

Jerryd Bayless will continue to draw criticism after bombing again. Thus far, he has 7 turnovers in just over 30 minutes, has shot 3 for 9, and has picked up just 5 assists. I still advocate giving him time. Last year in Portland, Bayless turned the ball over on just 13% of all his possessions. He's been wild and out of control, but when he's reigned in, he gets to the foul line and he scores. Whether he can pass like a "true point guard" remains to be seen, but he posted a 21% assist rate in 2009-2010, a figure I'd gladly accept this year.

The disparity in my evaluations of Bayless and J. Smith ("give him time" and "where the #@% is Aaron Gray?") is essentially empirically based. Smith hasn't performed in the past; that doesn't preclude future success, but it makes it more unlikely. Bayless has performed in the past, and it's likely he can regain that form if the teams stays patient.

I'd be remiss not to mention Willie Green. He's another guy that falls in the Jason Smith "hasn't performed before" category, and I'm still not a fan of his shot selection. But he doesn't make too many mistakes defensively, and if he's more selective on offense, he'll contribute. We're not getting 12 points on 10 shots from him every game though, but that Songaila trade looks better by the game.

Rounding out the bench tonight was Marcus Thornton. 7 rebounds, 2 steals, 17 points on 14 shots. To everyone that wrote off his 2009-2010 success as a function of his role on a bad team: kindly shut up now. Players don't magically become talented because they get to take a ton of shots for a mediocre team. Marcus Thornton is a quality basketball player.

The team's passing game without Chris Paul continues to be impressive. While CP assisted on just 13% of his 22 possessions, the rest of the team finished 20% of their possessions with assists. That's something you'd never, ever see with a Byron Scott-led team. Seven players posted at least two assists.

David West, Trevor Ariza, and Marco Belinelli all swung the ball with ease wit eeeasssee for the third straight game, and the team picked up easy buckets as a result.

On Tim Duncan and Emeka Okafor

TD looked absolutely terrible tonight, and Emeka Okafor certainly deserves a lot of credit. While Duncan was able to back Okafor down on occasion, Mek did a terrific job denying the face-up game. Okafor was only credited with one official blocked shot, but he challenged or altered almost every single Duncan attempt.

I don't think I've ever seen Duncan so rattled. He's still one of the game's best, and he'll undoubtedly post another stellar year. But for one night, he looked like a lost rookie. And it surely wasn't all Okafor's doing. The defining moment came in the fourth quarter when Duncan caught a pass underneath the hoop with no Hornet nearby. All he had to do was flip it in, or if he wanted to get fancy, dunk it. Instead, he traveled. Without the slightest possible reason to move at all, he traveled!

Okafor is at a disadvantage here because we'll always compare his defensive performance with 2007-2008 Tyson Chandler (one of the greatest defensive seasons by a center I've ever seen). If he can continue playing like this though, his contract is absolutely worth it.

Cherry on top? I accidentally left Duncan on my fantasy team's bench.

Three games is too small a sample to point out any legitimate trends. But New Orleans surely can't keep giving away points via the 3-second like this. The Hornets committed four (!) such violations tonight- one each by David West, Pops Mensah-Bonsu, Jason Smith, and Marco Belinelli.

Our increased 3-second violation rate is somewhat related to our improved post defense- nearly every play sees an extra Hornet hanging in the vicinity of the paint to provide help on both cutters and drivers. But we need to get smarter about how that help arrives.

You won't believe this next part. Check out the Hornets' minutes: 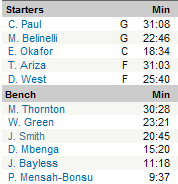 Chris Paul getting 31 minutes on the back end of a road back-to-back? In a 9 point win? It seems to good to be true. But if Monty Williams continues to use all 12 active players, this will continue to be the logical result. Monty even noted post-game, when asked if his rotations were finally set, that he wants to get Quincy Pondexter in the mix.

The obvious counterargument is that it isn't possible to play all 12 guys against the various talented teams in this league. To an extent, that's true. But a 12-man rotation did just pull off a back-to-back sweep against the Denver Nuggets and the San Antonio Spurs.

I laughed when Dell Demps and Monty Williams said they'd optimally limit CP3 to 34 a night. That and "success" seemed mutually exclusive. Now? I'm not so sure.

No matter how many times it happens, a barely 6 foot guard taking over a game is just totally ludicrous. First, from the play-by-play department come these two stretches in the 2nd and 3rd quarters:

That's 9 points created in under 80 seconds.

There's another 8 points in less than two minutes. For the second straight night, Paul had a 30 foot three at the shot clock buzzer. And of course, he absolutely destroyed George Hill's ankles before finishing a ridiculous floater off glass over two defenders to seal the game.

Let's all take a moment to laugh at John Hollinger.