Hornets 101, Nuggets 95: Actually Not That Scary

Share All sharing options for: Hornets 101, Nuggets 95: Actually Not That Scary

With a second straight win against a 2010 playoff team, New Orleans is off to a quick start. The road end of a back-to-back looms in San Antonio tomorrow, but for at least one more day, Monty Williams is undefeated.

Before we get into game specifics, I'll start off with this note: the 2010-2011 Hornets are playing fundamentally different basketball than their predecessors. It's not that it's better or faster or more fun to watch. It's just really different. The frequency and efficiency with which they score on plays not involving Chris Paul is terrific. Their swarming of the ball on defense is unlike any other Chris Paul-led Hornets team (including the '07-'08 version, which relied on directing offensive players towards preset help defense). I realize just two games are in the books and that the team could very well be short of energy tomorrow. But we couldn't have asked for a better mini-homestand to open a decidedly critical season.

The Denver Nuggets are always a tough matchup because of the way they play the Paul-West high pick. Chauncey Billups routinely goes over screens (where numerous teams opt to stay under and provide Paul additional space). The Nuggets' bigs don't allow West space on the perimeter the way other teams do. As we saw in the 2009 playoffs, that can be a lethal combination. The only way to combat such a defense is movement off the ball. If the shooters stay in their spots, the offense is bound to become stagnant. We saw a few symptoms of this in the third quarter, but in the first half, Ariza's movement off the ball kept things flowing.

We don't win this game without Mek. As great as Trevor Ariza was on defense, Carmelo Anthony still weaved his way into the paint a few times. Okafor came up with two huge blocks with the game on the line- the first on a Chauncey Billups layup at 3:51 and the second on an open Anthony layup at 0:58. His most impressive stat tonight: the 2 fouls. Given how many shots he attempted to alter (final block count of 4), he largely avoided making lower body contact with offensive players.

His contributions on the offensive end can't be overlooked either. He routinely made himself available to Chris Paul in the paint, and he put down a couple of nice lay-ins after establishing deep post position. I started writing a sort of "defense of Emeka Okafor" post this morning to publish on the weekend; Okafor's play tonight speaks for itself.

Though Anthony's 10-17 line doesn't show it, Ariza did a terrific job on him. And if you're not convinced, check out Anthony's shot locations: 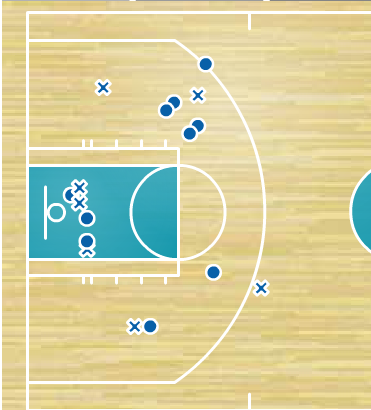 Eleven of his seventeen shots came from 17 feet or further. Every single one those came with a hand in his face. When a guy like Melo- who can get to the rim at will- takes jumpers all night, that's a victory for the defense. The way the refs called fouls tonight, Anthony could easily have had 10 to 15 free throw attempts if Ariza had allowed him into the paint more. Instead, Melo took just four foul shots.

The Nuggets' commentators made an off-hand reference to the fact that Monty Williams has his team extremely prepared for each opponent's specific tendencies. A look at David West's shot chart tonight illustrates this perfectly. On the left, his shots against Milwaukee; on the right, against Denver: 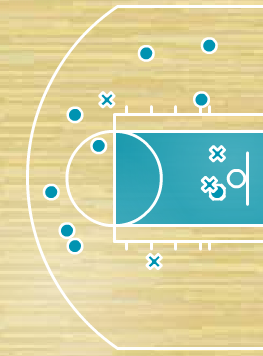 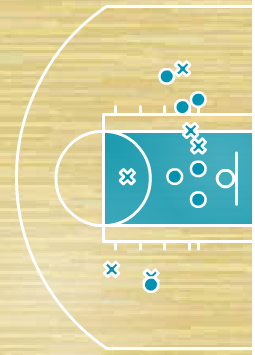 West didn't take a single shot tonight from outside 17 feet... a night after he absolutely torched the Bucks from outside that range. Not a single one! This was absolutely by design. As I mentioned earlier, Denver takes the 17 footer away from New Orleans through Billups' defense. Billups doesn't often lose Paul, meaning West's defender rarely has to rotate off to follow Paul. So instead of continuously running the high pick (a la Byron Scott), the Hornets ran the Paul-West pick and roll much closer to the hoop (most often at the left elbow extended). Additionally, West was freed to catch the ball at closer locations to the hoop. This allowed him to dribble into a post game. Throw those same passes to him at his normal 17, 18 feet from the hoop, and he has to kick the ball back out to the perimeter. The difference in the above shot location charts is one of the key ways New Orleans avoided offensive stagnation tonight.

And for the second straight game, the reason the lead disappeared was a flurry of silly fouls. Which leads to the next point...

Can We Play Aaron Gray? Please??

Jason Smith played 8 minutes tonight. In that time, he committed 4 fouls (all bad ones at that), and 2 turnovers. Sure, he knocked down an open jumper, but that really doesn't mean much. This team has plenty of offense; it needs rebounding, defense, and size. Pops Mensah-Bonsu can rebound. Aaron Gray can rebound. He's also huge.

I really hope we make the switch before it ends up costing us wins.

I'll let the play by play take it from here:

In less than four minutes, against a team that knew exactly how to defend him, Chris Paul singlehandedly orchestrated a 15-5 run that took us from a loss to a win.