Share All sharing options for: A Late Staturday: Projecting Wins

For all the moves the Hornets made this summer, they never could quite shake the national media's projection of another mediocre season. There might be one or two writers at ESPN that believe this is a playoff team. Even the guys at Hornets247 largely think we're lottery bound again.

I hate projecting wins because it's such an inexact science. But I'm more certain than most that, healthy, this is a playoff team. So I might as well get it on the record before things kick off.

As I've noted so many times this summer, a team improves not by adding good players, but by adding better players. It's all relative. It's stupid in its simplicity, but it's also stupid how often it's overlooked. Sure, it doesn't seem like a team could jump from the lottery to a decent playoff team without adding an Amar'e Stoudemire or Carmelo Anthony. You hear it so often. "New Orleans can't take the next step until they add a creative wing." And so on. It's often stated in terms of scoring or points per game, overlooking so many other aspects of team construction.

It's impossible to be high on these Hornets without fully appreciating just how poorly constructed the 2009-2010 edition was. We know anecdotally how the rosters shook out, but here's a far more comprehensive version. Minutes percentage data is from 82games.com and Win Shares/48 minutes (this is an extension of PER for offense and team defense attributed individually to players) is from b-r. Terrible color choice is from me. 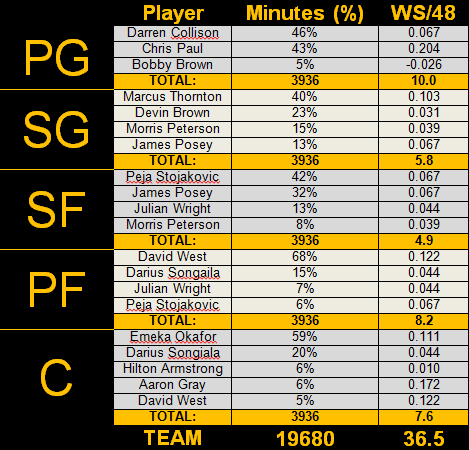 As you can see, the numbers "predicted" that New Orleans should have won 36.5 games last year. This is really close to the 37 wins they actually picked up. The "total" rows reflect a player's total win shares, taking minutes and quality/minute into account.

Let's start at the top and work down. Darren Collison had a pretty solid season. 0.067 WS/48 from a rookie is nothing to sneeze at. But take a look at the ridiculous gap between Collison and Paul. CP posted 0.204 WS/48, and by his standards, he played very poorly last season. A bad Chris Paul is about three times the player a good Darren Collison was. It's a monumental gap. Even if we presume that Jerryd Bayless will play a significantly worse point guard than Darren Collison (and as you'll see in the next table, we'll do exactly that for the final projection), Chris Paul figures to take back a massive amount of minutes, at crazy efficiency.

Shooting guard will likely be the position of least overall change this season. Marcus Thornton really carried the spot last year. He played a poor preseason, but the projections still like his odds overall. While Marco Belinelli likely won't be as infuriating as Devin Brown, he won't be that much of an upgrade.

Conversely, small forward will see the biggest spike. Peja Stojakovic registered the worst season in his career, James Posey was equally as bad, and Julian Wright and Morris Peterson somehow managed to be even worse than those two. Nobody came anywhere close to being vaguely productive. Peja's projected to have a small (realy small) rebound, though he's still not going to produce much. The addition of Trevor Ariza, though, should pay off well. Ariza is right around a league average forward with overrated shooting ability, but he's an immense improvement over Posey and Peja.

Changes at the 4 and 5 shouldn't be as pronounced. Projection systems see David West and Emeka Okafor as either decreasing or remaining largely static. On to the projections. WS/48 projections are again from b-r. 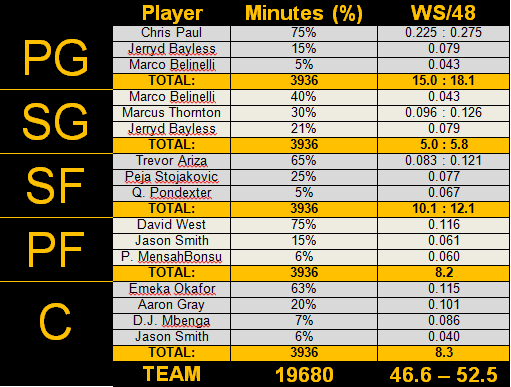 The two biggest questions for me will involve Chris Paul and Marcus Thornton. As you can see, I've listed a range of values for each player, while simply listing b-r's projections for everyone else. Minutes projections are also from me and assume full health (Chris Paul's 75% represents 36 minutes a night over a full season, David West's 75% is what he's played in each of the previous two years; ditto for Ariza).

The Chris Paul projection first. From 2007-2009, CP was arguably the best player in the NBA, posting back-to-back seasons of 0.284 WS/48 and 0.292 WS/48, leading the league with the 0.284 total. His low b-r projection reflects his poor play when he returned from injury towards the end of last season. Through the 2010 preseason, his mobility and quickness appear to have returned completely. If Chris Paul can indeed go back to being Chris Paul, this is a 50+ win team. If the b-r projection is right, the team will still compete for a playoff spot but could be significantly worse.

Marcus Thornton's fortunes are variably projected. B-R predicts that Thornton will regress as a sophomore by about 7%. Basketball Prospectus, though, projects a 22% increase in production. The difference could account for almost a one win swing, and that's before getting into how Monty Williams actually ends up using Thornton. Jerryd Bayless is the other wild card; I do believe Monty Williams will use him in a role that goes beyond simply playing backup point guard.

Update: Thanks to RedHopeful for making a great point about Trevor Ariza

[BPro and B-R also differ wildly on their Trevor Ariza projections. Basketball Prospectus expects him to produce almost 2 more wins than does B-R. In this case, I'm definitely on the side of BPro, which appears to do a better job of factoring in a player's usage rate to make a projection.

I'm not familiar with B-R's projection system so I don't want to say anything wrong here. But the B-R projection expects Ariza to play very similarly to his 2009-2010 Houston performance. Ariza struggled with the Rockets because he couldn't create shots for himself efficiently. His usage rocketed up from 16.7% to 21.2%. I'm not sure the B-R methodology accurately accounts for the fact that his usage rate will almost certainly come down by a similar amount this year. Basketball Prospectus' SCHOENE projects a 17.7% usage rate and (conservatively) projects him to retain 83% of the value he had with the 2008-2009 L.A. Lakers.

The change is now reflected in the above table and could account for as many as two extra wins this year. While I'm really on the fence about which Marcus Thornton projection will be more accurate, I'd be willing to bet that BPro is correct about Trevor Ariza]

The SCHOENE projection system (found in Basketball Prospectus 2011) has New Orleans finishing 5th in the Western Conference with 49 wins (and with the 2nd best offense in the NBA). A Wages of Wins Model projects the Hornets to finish with 54 wins. Basketball Prospectus' alternate model, NBAPET, predicts an absurd 98.3% playoff probability for New Orleans (without Jerryd Bayless). And Basketball Reference's Statistical Plus/Minus Model projects 47 wins and a 5th place finish. Virtually every projection system sees an overall drop in quality in the teams competing for the final Western Conference playoff spots (ie, nobody thinks it'll take 50 wins no matter what).

I agree that many, many questions still surround this team. I don't agree with the overarching negativity. Is there such a thing as a post-post-hype sleeper? There is now.