A spot to drop your quick thoughts on the game. After the jump, the box score, some advanced stats, and due to my inability to find a feed, some not-advanced-at-all bullets. 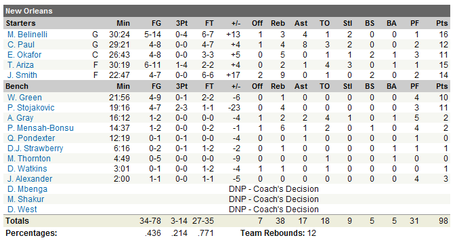 Some stats that stand out:

And speaking of swang pendulums, how about Marcus Thornton's line? 5 minutes, 5 missed field goals, and he missed out on the 5 trillion by a measly turnover. We're still two weeks away from opening night, but Belinelli pretty clearly projects to be the starter.