And for the first time in nearly nine months, the Hornets are back above .500.

(Okay, that sounds way more dramatic than it probably should.) 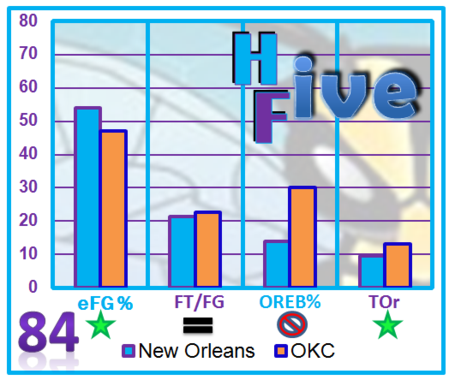 I had a bad feeling about this game: a mediocre shooting team (us) against one of the league's best shooting defenses  (them). Instead, shooting proved to be one of our key advantages on this night. At a 54 eFG% clip, the Hornets not only exceeded their own season average by 5%, but also Oklahoma City's allowed average by a good 7%.

And once again, it happened despite a very poor shooting night from Chris Paul.Taking away CP's numbers, the team shot a strong 32 for 61 from the floor (7 for 20 from three). Emeka Okafor's 7 for 10, David West's 8 for 14, and Peja's 4 for 10 from three were the catalysts.

Staying with Paul, it's difficult to assess what exactly has happened. He began the year white hot, leading the league in TS% and eFG% by wide margins. That was always due for statistical regression, but this much? He simply hasn't looked the same since returning, and recently, it's only gotten worse. The same logic that told us he couldn't shoot 60% all year indicates that he also can't shoot 30% the rest of the way. But while it stays this way, it's tough to watch.

The Thunder, on the other hand, haven't been a good shooting team all year. It continued tonight. One of two additions could make OKC a very scary team in the playoffs: a three point threat or a big man (scoring or defensive). Right now, they have neither, and that keeps them a fringe playoff team. Tonight, they shot a paltry 4 for 15 from three (27%). On the season, they're the conference's 3rd worst three point shooting team. They neither allow good three percentages nor convert good ones themselves. Call them a throwback team, but it's not helping them much.

What kept OKC in the game, though, was their rebounding. Check out today's graph and you'll see that the teams played turnovers and free throws relatively close, with New Orleans, again, edging the shooting. But that rebounding disparity was monumental. For the eighty-sixth time this year, the raw rebounding numbers (44 to 35, OKC) don't tell the entire story. The raw figures indicate a 9 board differential, which isn't massive at first glance (or to put it another way, wouldn't normally be enough to offset the Hornets +7.2% eFG differential). But keeping in mind that the Hornets missed 38 shots to the Thunder's 44, the Hornets actually recorded nine fewer rebounders despite receiving 8 more defensive opportunities. Rate-wise, OKC more than doubled up New Orleans on the offensive glass.

Some individual and other thoughts: