Share All sharing options for: The All-Decade New Orleans Hornets of Charlotte

As you may have heard, it is now 2010. And since decade-ending and list-making go together like awful movies and Nicolas Cage, it's time to lay out the best of the best.

The criteria: players from November 2000 to December 2009 are eligible, and I suppose we'll need two guards, two forwards, and a center. And just for fun, let's toss in a 6 man bench too.

Starting at Guard, from Baylor University... the '03 David Wesley! 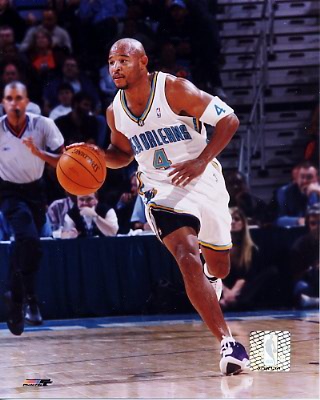 Starting at the other Guard spot, from Wake Forest University, the '09 Chris Paul! 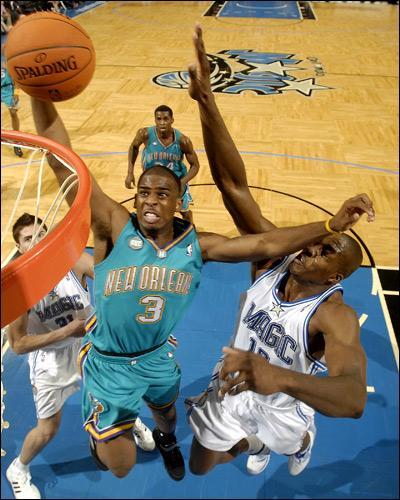 This picture always cracks me up. Look at Dwight's face! Ahahahahh! Darko randomly being on the left elevates the comedy to legendary levels.

Guess you saw this one coming. I would probably back up the '09 Paul with the '08 Paul, '07 Paul, '06 Paul, then the '05 Paul, with the '04 Baron Davis duking it out with the '05 Dan Dickau for 6th string. Practices would be awesome. Davis and Dickau could go one-on-one with the various Pauls sitting on the sidelines, cackling.

Starting at forward, from the University of Kentucky, the '03 Jamal Mashburn! 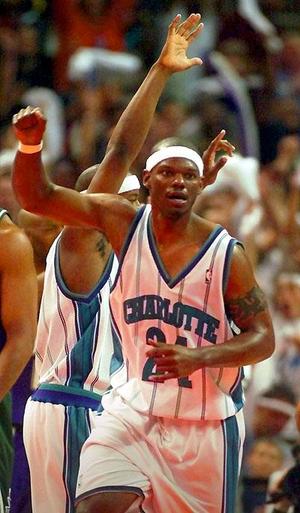 One of my all-time favorite Hornets, Mashburn had his career year in 2002-2003, which also happened to be his last healthy season. The year before, he struggled severely with injuries, including getting taken off on a stretcher from a playoff game (I can't recall what happened to him, just that he was on a stretcher at some point). Then in '03, the Hornets moved to NOLA, he played in 82 games for the first time in his career, dropped 21/6/5, made his first and only All-Star, and had a great individual first round. A special year, both sentimentally and production-wise, that will always rank up there for Hornet fans with Zo's rookie year, Muggsy's first year starting, LJ's first All-Star year, Rice's ridiculous three point season, and Chris Paul's '08-'09.

Starting at the other Forward, from Louisiana Tech University, the '03 Collier Brown Jr! 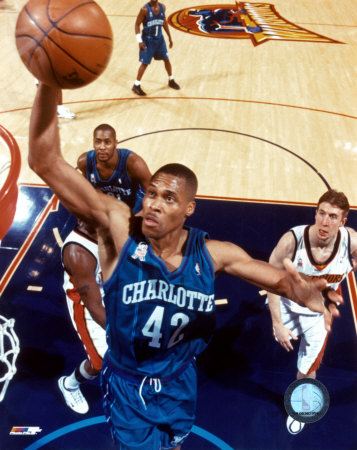 Another rather humorous picture, if only for the presence of Troy Murphy's face.

Easily the toughest call of them all. On the one hand, you've got the guy who anchored the post for the first half of the decade, on the other you've got the guy who anchored the post (albeit, often from 17 feet away) for the second half. In the end, I had to side with the '03 P.J. over '08 DX, on statistical terms. While the '08 DX was more skilled offensively and a go-to on offense, the '03 Brown blows him away in terms of offensive efficiency (he led the NBA), rebounding, defense, and even shooting, despite not having Chris Paul. 6.4 offensive win shares for the '03 Brown versus 4.3 for the '08 West seals it.

And finally, starting at Center, from Dominguez High School, the '08 Tyson Chandler! 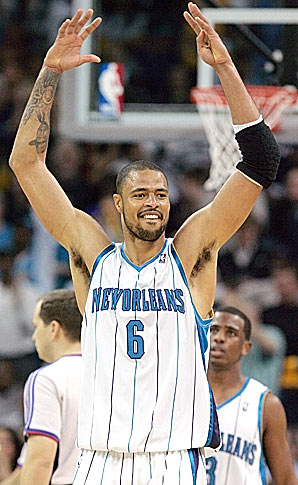 Best defensive season by a center I've seen by a non-TD, probably ever. He was funny, by all accounts a great teammate, and he could dunk too.. Chandler symbolizes that '08 run for me; CP and DX made it go, but the Repair Man was always right in the middle of it. Has to be the center on this team, especially as you consider the "alternatives."

And onto the bench:

'02 Baron Davis: Maybe he was statistically better in '04, but this was right after he exploded onto the scene, and right before his head got too big.

'06 Earl Smith III: B-Scott hated his guts, but he had range, moves, and hops and provided NOLA/CHA with perhaps its most pure SG of the decade from November '04 to April '06.

'08 Predrag Stojakovic: Arguably THE greatest three point season ever. EVER. Nobody in NBA history hit as many threes as Peja did at 40% or better. Quantity and quality, it was all there, so the '08 Peja definitely  cracks this bench.

'03 Jamaal Magloire: This was actually the Big Cat's best year, not his All-Star year, and he spent most of it backing up Elden the Elderly. So he fits in perfectly.

'09 Ryan Bowen: Do the hustle! Maybe the only NBA-er of the decade that could out-Scalabrine Brian Scalabrine.