Devin Brown scores 30, Hornets win in Utah, Hilton with a double-double, Mo-Pete plays, and I only made one of those things up. 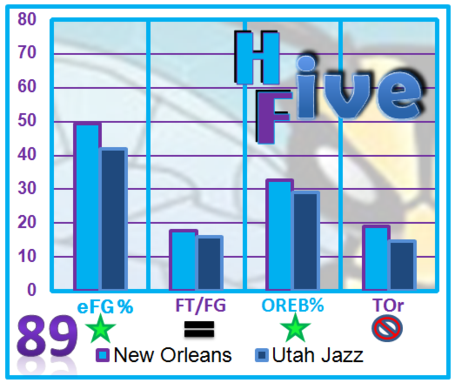 Of all the teams Chris Paul has been on since '06, it's strange that the '10 Hornets would be the first to surpass the Utah hurdle. The game showed early signs of turning into the typical Utah beatdown, but the team once again displayed a trait that has come to the fore this year- a very random resilience.

Why random? Resilience is a trait commonly associated with good teams. But if you think about it, the two aren't necessarily connected. Take the 07-08 Hornets, for example. Very good team. But were they really that transcendent in terms of returning from deficits and fighting back? Not really. The 08-09 Hornets should probably never be mentioned on the same page as the word. Off the top of my head, this 09-10 Hornets team has fought back from deficits against the Lakers (20 points to single digits?), Hawks (double digits), and Jazz tonight, among others. Never mind that the Lakers benched their starters in that game, etc. I'm not saying that the Hornets are good. Just that they don't lay down and die at the first sign of adversity, at the same alarming frequency.

Utah took a 32-20 lead at 2:06 in the first quarter, their largest of the game. At that point, the Hornets had already committed 6 turnovers. David West, who started off hot, went to the bench. Things looked bleak. A quarter later, though, the Hornets headed into the break within single digits, the table set for their third quarter blitz.

How did it happen? Defense. After giving up 32 in the opening quarter, the Hornets allowed just 30 in the second and third quarters combined. A Collison/Mo/Julian/Posey/Songaila lineup did very well in the second quarter, which really isn't too surprising, considering that all except Songaila are solid defenders and that Utah didn't have a true center on the floor (Boozer/Millsap). The Hornets' offense sputtered in the 2nd quarter, barely scraping 20 points together, but it didn't matter. I randomly rewatched Fast and Furious the other day (horrible from a cinematic standpoint, passable for the racing scenes) so a street racing analogy is in order. The situation would be analogous to a driver absorbing body blows for much of a race before hitting the nitrous at the end. Point being: get done in by the blows and you don't have a chance later on (see: 08-09 NOH). Also, I guess that, uh, makes Devin Brown the nitrous. Yeah. Moving on.

Frankly, this game wasn't terribly interesting from an individual player standpoint. Both Pauls sucked (Chris and Millsap), both PF's were decent, Deron Williams outplayed CP for the fifty fourth time, and Devin Brown saved the day.

A look at the chart above reveals that UTA and NOH played to a draw across the board, excepting shooting. Devin's 5-8 on triples and DX's 9-13 overall buoyed the Hornets' percentages. Turnovers were an issue for us; Emeka Okafor's 4 turnovers (2 offensive fouls) in a paltry 30 minutes didn't help matters. Both teams hit the offensive glass well, with Boozer doing the heavy lifting for Utah (5), and Paul and Okafor splitting 6 evenly for the Hornets.