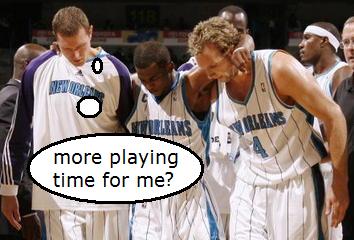 New Orleans Hornets All-Star point guard Chris Paul(notes) will undergo arthroscopic surgery for a cartilage tear in his left knee on Monday and could miss one to two months, sources close to Paul told Yahoo! Sports on Sunday night.

Paul injured the knee in the final moments of regulation in a loss to the Chicago Bulls on Friday. Paul was injured after he fell into a photographer on the baseline after trying to catch an errant inbounds pass from Hornets forward David West. Paul came up limping after the play, which led to the Bulls tying the game with .2 seconds left.

Paul also told reporters he had initially twisted the same knee in a win over the Golden State Warriors on Wednesday.

Test results revealed a partial tear to Paul’s meniscus. There is still some doubt as to the extent of the injury, one source said, but it is not believed to be season-ending.

Paul is expected to miss the All-Star Game because of the injury. Once the NBA confirms Paul’s unavailability, commissioner David Stern will appoint a replacement to the Western Conference roster. Denver Nuggets point guard Chauncey Billups likely will be among the leading candidates to replace Paul.