Still not entirely sure how that happened. 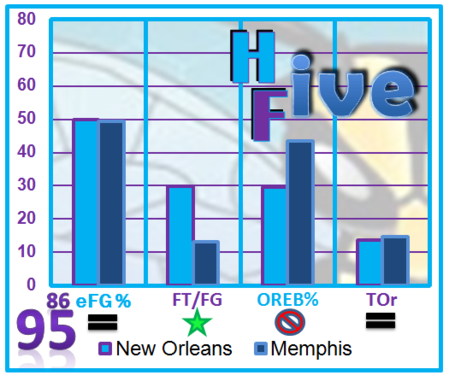 Two things particularly stand out. First, the rate of the Hornets' capitulation in the first quarter is kind of embarrassing (as Darren Collison alluded to after the game). Things were going decently, then a quick dip, then a complete collapse. The Hornets' 19 point deficit almost felt like it came from nowhere, even as I watched Memphis continue its pre-game layup lines into the game itself. Where does the blame go? Thornton's 1 for 10 start didn't help (and as much as I love Buckets, 10 shots in the opening 15 minutes is totally overboard). Nor did playing him at the point. Emeka was dominated by Marc Gasol*.

The second thing that stands out is how relentless the New Orleans comeback was. Seriously, look at that game flow. Memphis put in one run to curb the Hornets' efforts in the middle of the third quarter. But the entire second half, the lead was slowly thinning; there weren't even stretches of even play. The third quarter was the domain of Peja and Collison-Mekatron. Predrag scored 10 points off 4 shots, after scoring 4 points on 5 shots until that point. He went 1 for 8 from three in quarters 1, 2, 4, and OT, but he was at the center of the third quarter run.

Collison definitely deserves his own paragraph. DC in the second half was vintage rookie/sophomore Chris Paul. From 2005 to early 2007, CP attacked the paint even more than the last couple years because he didn't yet have the ability to pull up from midrange. The result was Okafor dunk after Okafor dunk, on an assortment of sweet no-look and wrap around passes. It's not really a surprise that Jim Flower opted to use Collison in the "Chris Paul role," given what he did last time CP was hurt. The coaching staff essentially handed him complete control of the offense; Collison's creativity last night was simply astounding.

Last night also puts into perspective the things Paul does for us on a nightly basis. Almost all sports have defined roles into which players slot their style of play. But in many other sports, players establish themselves in unique roles, outside of those generally laid out. I've been watching a lot of international soccer over the last year; a sport where the "Makelele" and the "Gerrard" have essentially become new positions, based on the play of the players they're named after. And it's gotten me thinking... there really aren't too many roles outside the traditional 1 to 5 in basketball. Sure, there's the swingman and the hybrid big, but how many players have a truly irreplaceable skill set offensively? Kobe? Put Melo or the Durantula on L.A., and would the drop-off really be that tremendous? Wade? A Monta Ellis or Tyreke Evans (having the best rookie year of any player since Paul) could certainly fit in a similar offense, if less efficiently. But the two most irreplaceable guys, at least in terms of team style, have to be LBJ and CP3.

Is giving the ball to Deron and his turnover rates for obscene amounts of time and dribbles per possession really a viable strategy? How about giving the sub 49% eFG'ing Derrick Rose freedom to shoot at will? Nash comes close to a very unique, impossible-to-supplant style, but can you really not see Chris Paul (or Deron for that matter) running and gunning up the floor on fast breaks all night, finding three point shooters? For all those reasons, I truly think the "Chris Paul" position is one that no other point in the league can consistently play. And it takes an almost flawless game from Collison to show us what that position means on a nightly basis.