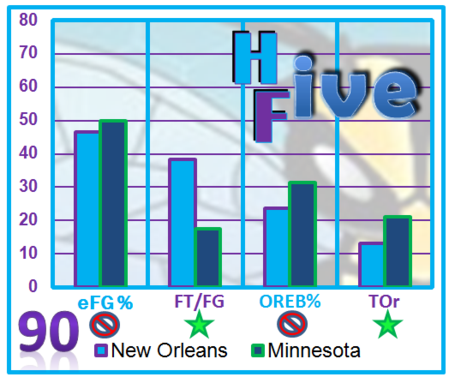 That's now two trips to Minnesota, and two wins off inbound plays from the right side. Floyd has actually called the exact same setup three consecutive times. In that first game, Posey was the inbound man and designated back cutter, but Paul mishandled the pass. Of course, on the very next play, Paul was the inbound man and designated back cutter, and David West hit him perfectly. The second play built on the first one- Minnesota assumed to some degree that the Hornets couldn't possibly run the exact same play twice in a row.

Similarly, the third play, tonight's game winner, built on the second. CP tossed in; this immediately pressured Minnesota to follow Paul closely, regardless of where he went. In particular, the Posey's defender (C. Brewer) was targeted because on the previous game winner, the man guarding the inbound catcher was screened, then burned to the hoop. Perhaps the decision to make Chris Paul a decoy was influenced by the fact he could only see out of one eye, but it was certainly far more refreshingly creative than the usual "give the ball to Scorer X, let him fade away from 20" route that is so often employed.

Getting back to the larger scheme of things, this game was decided by our ability to get to the foul line. Chris Paul and David West led the charge with 8 and 9 attempts respectively, but Darius Songaila's 7 attempts cannot go unappreciated. Songaila turned a good number of his routine midrange attempts into forays to the paint. And the Wolves, repeatedly attempting to take charges, either got their timing wrong or got unlucky, time and time again. The Hornets ended up attempting 34 free throws (which I have to double check on, but am pretty sure is their season high). Seventeen (give or take) trips to the line in a 90 possession game? That's going to win you some ball games.

New Orleans needed that effort too, considering how close the rest of the game was played. The Wolves were hammered in the turnover department, but seemed to settle down in the second half (although the late Brewer turnover was an absolute killer for them). Other than that, they owned rebounding, as expected, and out shot us from the field.

And though this was a win, the game continued to expose one of our fatal flaws: interior defense. We gave up a minimum of 15 uncontested layups today, which you don't need me to tell you is ridiculous. Ramon Sessions didn't break a sweat in scoring his 11 points, and while Al Jefferson had to work pretty hard, he too torched Emeka Okafor at the end of the day. The Hornets' post defense is unbelievably pathetic at this point. The guards don't stay in front of ballhandlers, the forwards are horrible at contesting shots, and the big men seemingly have no idea when to step in and help. It's a mess, epitomized by Songaila allowing Jonny Flynn to tie the game on a three point play. The statistics say that we played a very clean, non-fouling game, but the reasons for that are obvious: we opted to allow easy layups whenever a Timberwolf entered the paint.

The standings say we're a game out of the 8th, but tonight we play a revitalized Denver team, on the road, that absolutely loves getting into the paint. Minnesota was a fun win for sure, but back to back game winners against the Grizzlies and Wolves isn't exactly the most inspiring thing in the world.