Another day, another tough loss. 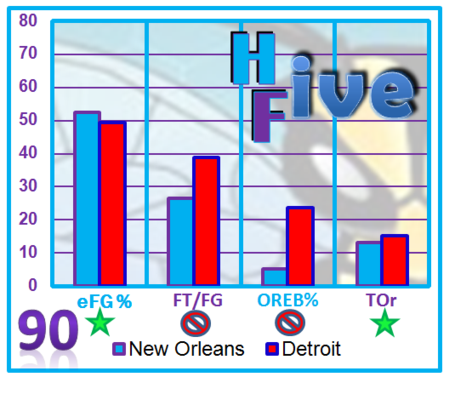 After their early January surge, the Hornets have now dropped two of three games, to 11-25 and 13-25 teams. It's gotten to the point where keeping one eye on the standings just feels silly. While Houston has dropped off, Utah, OKC, and even Memphis have played inspired basketball. Where do we go from here? Or, first perhaps, what went wrong last night?

Defensive rebounding has been a struggle for the Hornets, ever since Tyson Chandler's departure. In '07-'08 (which can now officially be referred to in the past tense as the "glory years"), New Orleans finished as the league's 3rd best defensive rebounding team. Not only was the Repair Man reaching Ceiling Fan altitudes, but Melvin Ely and David West were hitting the glass hard. In '08-'09, the Hornets struggled with injury obviously, but still eked out a 7th overall finish in the league. Essentially, one of the team's big strengths in the later parts of the 00's has turned into a size-able weakness overnight.

Tyson's impact has actually been more than canceled by Emeka Okafor. Mekatron's 25% mark is top-20 in the league, and five percent higher than Tyson's last season (interestingly, it's also his worst mark in four years). The real losses have come in the form of David West (2.5% drop off in rate) and the coaches' decision not to use Sean Marks. By not playing Marks, the Hornets sacrifice a very solid 18% rebounding mark. And matters are only compounded by the fact that his replacement, Songaila, isn't a very good rebounder at all.

After this rant on the d-rebounding, I should mention that the chart above seemingly indicates offensive rebounding was the issue, not defensive. But the 23.8% mark you see for Detroit was sort of artificially deflated down the stretch. The Pistons didn't grab an offensive rebound for the last 10:45 of the game (last 5:45 of the 4th, and OT). So the final number doesn't accurately represent just how much they dominated the initial 42 minutes of the game. For what it's worth, our mediocre offensive numbers are probably worth looking into at some point as well; they're even worse.

The poor rebounding coupled with the on-going foul fest (Detroit took 40 free throws! 40!) spelled our certain doom. I still don't know what to make of CP fouling out. On the one hand, I guess I'm happy that the refs didn't protect a superstar... but then again, they do 99 times out of a 100, and I'd rather the 1% not be us, you know? Or maybe you don't. NBA officiating will never cease to puzzle me. Is "fair" an absolute term? Should it be judged relative to the standard error that all officials should be assumed to make? Either way, being blasted on the boards leaves us no excuse to blame the refs.

I'll leave you with an, um, interesting stat:

Am I the only one in slight disbelief that Ben didn't commit a single foul last night despite playing some of the most physical, effective D we've seen all season?

We did it to ourselves, but we had help.