More on Chandler for Okafor

Share All sharing options for: More on Chandler for Okafor 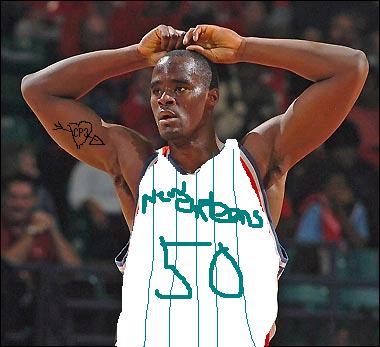 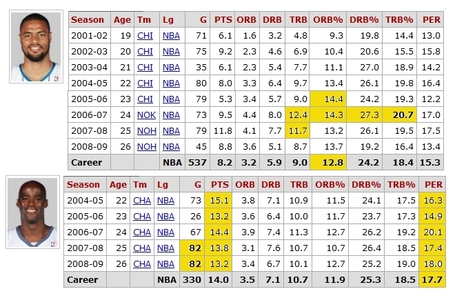 1) Offensive Productivity - The general consensus so far has been that Emeka is the better offensive player and the worser defender. The stats can pretty much support this. Emeka has been pretty consistent in scoring, averaging around 15 points a game over his career, and Tyson's stats show he's just around 10 a game. But in addition to the 5 point gap, look at how they scored. The last three years, Tyson has had the best point guard in the league setting him up. He has not had to rely on many post-moves to score his 8 points a game; most of them are just created for him by CP3. And we've seen a few of Tyson's "post-moves": the turn-around, the fakes; no offense (no pun intended), but none of them are particularly impressive. Emeka has a decent selection of post moves, and can score on his own frequently. Hollinger writes, "Okafor can score on post-ups occasionally and make short bank shots, while Chandler's range ends at the charge circle." Check Ryan's analysis on H247 comparing the two players' offense. With CP3 setting Emeka up, it'll only make him a better offensive player. Advantage : Emeka.

2) Defensive Defense - Emeka's not bad at defense; Tyson is just better. There's also the height difference that comes in here. Tyson stands 7'1'', three inches taller than Emeka. Even though Okafor has matched up fairly decently with other 7-footers, Tyson is still a bigger presence in the post. Queen City Hoops went through a great analysis on defense. If you read through that, statistically based on an opponent's expected PER versus the opponent's actual PER, Tyson is by far a better defender. Although I'm not entirely sold theoretical stats, Advantage : Tyson.

3) Rebounding - I really expected a way larger gap between the rebounding numbers, Tyson being better. The stats seem to show them pretty evenly. Still, look at a few of the yellow highlighted rebounding boxes for Tyson and you'll see a somewhat upward trend in numbers; I'm sure he would've put up better numbers this year if he wasn't injured. Emeka has stayed at the same level of rebounding since his rookie year. Once more, there's the height; 7'1'' vs. 6'10'' favors Tyson immediately. Add in his tenacity and aggressiveness and Advantage : Tyson.

4) Health - Although both players have averaged almost the same amount of games played per year (EO-66, TC-67), Emeka's been healthy these last two years playing all 82. We all know what happened to Tyson last year, playing just 45, often playing with some kind of injury. Plus, he failed a physical for the Thunder. Failed. Not exactly healthy. I'm not expecting him to recover and play 82 next year, and neither are the Hornets; that's a reason he's even being traded. Even though Emeka has had some injury problems before, he's been healthy the last two years. Advantage: Emeka.

5) Salary - The Hornets save around $1.3 million for next year. Advantage: Emeka.

In the end, I'd have to say the Hornets got a better deal here. I'm not going to say the 'Cats were ripped off like Kelly Dwyer; I'll only be able to see that after next season starts. Maybe I'm just glad that the Hornets didn't just get Big Ben's expiring contract or that the front office actually went through with a substantial move. So I'd give this deal a 6/10, slightly better than trading Kirk Haston for Kirk Haston.

I'll definitely miss Tyson. I'll end with some CP3, "I'm losing a great friend, a brother. T.C. is my man. ... I'm going to miss him. It's going to take some time to see how this works out. I want Emeka to come in here and be the best player he's ever been. From today on out, that's my teammate. ... Hopefully we can eventually have the same relationship that me and Tyson had."

Feel free to add in any comments on the deal here.