A question that many fans might be, or rather have been asking is, what went wrong from last season to this? Now, I'm not a stats guy who over analyses ever facet of the game. What I am interested in is as a whole what did the team do wrong? I have the belief it had a lot to do with the last offseason and preseason, more after the jump.

These two did little this year after big expectations last year.

To establish where the Hornets went "wrong" I think you have to look at the expectations presented to us after last years playoff run. Everyone, I mean everyone, thought we were going to be contenders this year. And I think that rubbed off on the team. Even they thought they were contending, Byron made it clear that James Posey was to be our sixth man and no more, that all other parts of our team were constructive towards a contending team. I guess that's where it really began mentally for the team was the handling of expectations, unwarranted I might add. People saying that we would make it into the conference finals and might even get to the finals didn't look at our depth, our lack of rebounding, what they did look at was what occurred in the past to make their judgments of today.

When Mo Pete got injured early in the season I think it was the key to the break down in this team. Let me explain. Prior to the season our starting team was exactly the same. Exactly. We also could count on Mo to score for us a little bit, not just from three but off screens and iso's some what. When he went down there was a huge gap to be filled, which was somewhat by Rasual Butler. The Phoenix came in and rose from the dead to resurrect a dead basketball career to show us that he still had that three point stroke we all knew he had. He also showed us that he could play a little D, but again, the team chemistry was affected in my view because he brought a different role to the team. Okay, your thinking that Mo pretty much did the same, stood on the wing and waited for the ball on the three point line. But I beg to differ. I watched Mo for a couple of games last season and I saw him cutting for the O board, for that backdoor cut moving around to give CP another option, not just standing there like another Peja Stojakovic. Not only was Mo's injury bad for the fact that he left the starting lineup, BUT he also was stuck DEEP in Byron's rotation. Meaning; little playing time unless proved otherwise. That is what got to me during the year. We didn't replace the gap that Butler left on the bench, that other scoring threat. I am all fine with Mo being on the bench, but getting little to no time, that makes your bench a lot weaker.

The Absence of a Jannero Pargo

In other words, the absence of Jannero Pargo. Now I have heard it a million times here atthehive and over at hornets247 that Daniels is just as an effective player as Pargo in terms of shooting the ball etc. But, Pargo was good for two reasons. One he could get the ball through the hoop in a flurry. JP could score, it was as simple as that. In fact he was one of the reasons our bench was so good last year. Yeh, he jacked up the ball a tonne, but he could in fact get it to go. The second reason is his ability to push the ball up the court. He was a relatively quick guy, that is why he complimented CP so well, a similar (not the same duh) game to that of #3. He could pass it reasonably well despite his assist statistics in comparison the AD. Jannero brought those intangibles, he was established from prior seasons. I think the rush to replace him midseason was a mistake because our bench could not find its groove. 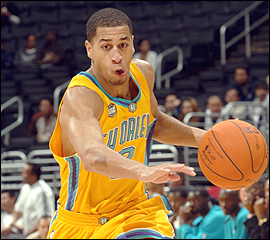 We'll I think it is safe to say that Hilton Armstrong and Julian Wright are still somewhat rookies. I mean rookies in the mind of Byron Scott. Byron gave these guys every opportunity to excel, but they just didn't simple as that. I'll say it now, I am afraid of the word inconsistency, the connotations of the word means that nothing is assured. One night something can be everything you thought it could be and more, others that thing can be the most horrific sight ever seen. That was the story with these two guys, JuJu showed that he can play, see 20 points against OKC and also a terrific night against Dallas on TNT (for my memory). Hilton never really showed up, he put in some nice performances here and there showing he can be an okay center, but a center who can't rebound isn't really a center. If and when these guys can perform is a big Q. I think everyone still loves the promise of JuJu, but everyone has pretty much given up on Hilton "Longneck" Armstrong. We will see, time is not on our side.

I don't think this really was as much of a weak point as everyone was eluding to during the playoffs. I just think that we were beat down, and showed little heart or desire. Last year we were ready to go, full of words like "ZING" and "ZANG" and "ZWIP" which no one really knows about yet still are energetic just saying them! I think everything with Byron starts with motivation, if the team is willing to listen they do, but if they don't, well they just simple tune out. I got that sense in the timeouts over the TV. I could sense sometimes that the guys had their heads up were keying at his every word, where as other times they were heads down, tired just enjoying the break wondering why a bald guy was talking to them. I think that Byron is very similar to Mike Brown of the Cavs. I can very easily see the Cavs falling into a little bit of a hole if they do what we did and just sign ONE guy (which I doubt). I think a coach is only as good as his team. Sure coaches can put their touch on the game here and there but overall I think a lot of the coaching is done prior to the game and during halftime for adjustments.

What does the future hold? We'll an off-season that could well be a surprising one. If your looking for what I think will happen, I think TC will get traded despite what Hornets management is elluding too. I think that the rest of the team will stay relatively the same, maybe add one guy here or there but I wouldn't bet on it. Our chances next year? We'll we MUST, MUST, get a third scorer. Not necessarily a CP or David West type guy, just someone we can run an iso too here or there who can create his own shot. The guy could very easily be on our roster, Mo Pete. We'll he did it in our run to the playoffs in 07-08, why not 09-10? Health is the key for our guys, we are old and young at the same time (confusing I know). If we are to contend we have to have a group of guys playing for at least 70 games next season.