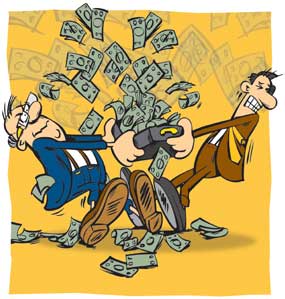 The Hornets have traded out of NBA drafts four times in their 20 year history, for an average of about once every five years. With the economic downturn and the Hornets' current position over the luxury tax, Jeff Bower and the front office must certainly feel a little queasy about committing guaranteed dollars to a 21st overall selection. So we have historical precedent and some element of justifiability. Additionally, the Hornets would not be governed by the Ted Stepien Rule (stating that a team cannot trade two consecutive draft picks) because last year, they technically "drafted" Darrell Arthur before moving him. Under what circumstances would the Hornets trade the pick, and would it be the right move?

Ryan speculated at Hornets247 that New Orleans may try to move Tyson Chandler in a draft day deal. I agreed with this at the time, but recent comments from Jeff Bower have convinced me otherwise. That's not to say I'm taking everything the front office says at face value, but there are other factors supporting this. The primary one is the luxury tax motivation. The Hornets attempted to move Chandler before the deadline because it would get them under the cap for 2009-2010. On July 1st (the first day deals can be made), the clock begins ticking for 2009-2010, and subsequent moves would provide cap relief for 2010-2011. In essence, the Hornets have given into the fact that they'll be over or just at the tax for this upcoming season. The second factor is New Orleans has the expiring contracts of Antonio Daniels and Rasual Butler (only 3 and a half large, but still) to potentially move during the upcoming year. Couple all that with the fact that selling Chandler now would be the definition of "sell low," and there's a lot of logic behind keeping Chandler around.

In the end, the decision comes down to the ultimate value of the 21st pick. Ryan did his annual (excellent) assessment of our draft pick, and ESPN's Draft Initiative set of articles concluded that the average player taken with the 21st pick is in the ilk of Jon Barry, the ceiling is Rajon Rondo, and the floor is Daequan Cook (who was awful as a rookie). On top of that, the '09 draft is a weak one by all accounts, though full of point guards.

My automatic assumption here is that the Hornets will have a deal in place no matter what, before their pick comes up. They'll have a target set of players, and the more it looks like none of those players will make it to 21, the more likely it is they pull the trigger on a preset deal. If a trade is made, I would be willing to put down a hundred bucks right now that it would be part of a larger Chandler/West/Peja deal. Back to back pick sales are simply not going to happen.

In the end, I think the odds of a pick trade being the right move are very low- even if it assists a larger trade, unless younger players are received. The Hornets are scheduled to have just 7 players under contract next summer, and 3 in 2011. There will be simply far too many holes to fill via free agency. Having a young player or two under team control in 2011 will be absolutely vital, even if those players are mediocre. Going into 2009-2010, the Hornets will not only be fielding the oldest roster in the league, but they'll also top the NBA in payroll. They're not getting much bang for their buck, and foregoing draft picks, despite the short term cap relief, can only spiral us further out of control.