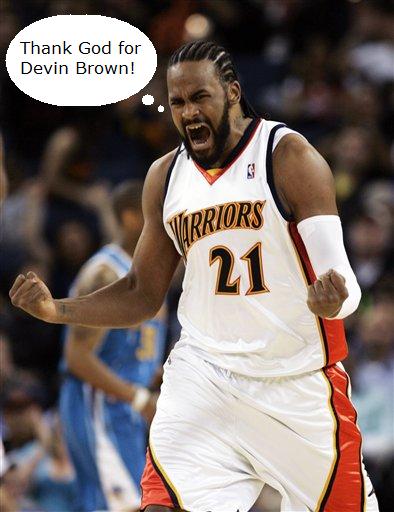 Terrible loss. Terrible considering the Warriors only had 7 players, missing their top three at least, and were well out of playoff contention.

- One of the Warriors television network's "Keys to the Game" was to let Chris Paul shoot outside jumpers. Although initially I mocked this idea when CP3 was lighting it up from afar, later in the game one of the commentator's insightful comments fascinated me. Although Chris Paul tied his career high of 43, the rest of the team hardly scored at all (of course, with the exception of David West who had 31). There was a severe lack of supporting cast here (Tyson, Posey), and the I think one of the obvious missing pieces was Mo Pete's shooting. Wait, Mo Pete was at the game? Sitting on the bench? In uniform? Hmmm...

- To be fair, the Ronny Turiaf picture thing thing above isn't entirely accurate. Sure, Devin Brown took a couple of really, really important three pointers when obvious other shooters were open and missed them, but not too much of the blame falls upon him. Most of it falls upon Byron Scott for playing him. Unless Mo Pete is actually injured terribly but for some reason on the bench ready to play, he is the obvious choice over Devin Brown. A lot of Hornets fans agree (going by the game thread's consistent Devin Brown rants) that Devin Brown has no business taking important threes and playing time. We're all still waiting for Byron's rotation to work out well, hopefully the return of Peja fixes some of it.

- Some people might chalk this up as an embarrassing loss for the Hornets, who were fighting for an important win to keep good playoff position whereas the Warriors were looking out for a good draft pick. Add that to what was mentioned earlier, the Warriors only had 7 players, suited an injured player as their 8th man, and were missing their best players: Monta, Biedrins, and Captain Jack (and Magette if you consider him good). But in reality, the young Warriors squad had a lot going for them. Jamal Crawford was ridiculous, hitting, what seemed like, every shot he took. We figured he'd cool down later, but he ended up going hot for the entire game, scoring 39. Then there was Anthony Morrow who hit 5 threes and 24 points, and the other Anthony who had an additional 20. Maybe if we had Tyson we could have stopped them from driving as much to the hoop, but there's no denying that outside shooting they definitely had today.

- Going back to the two All-Stars on the court, DX and CP3 combined for 74 points. Which was 71.8% of the entire team's total. Chris Paul consistently was awesome throughout the game, hitting the mid-range shots, threes (4-9 3PTs), and floaters. He also added 9 assists and 4 rebounds. David West was really slow in the first half, but ended up speeding it up in the second half, finishing with his 25th double double this year off of 14-27 shooting. Great game for these two, although the rest of the team left much to be desired.

- Peja finally came back and finished with 7 points. He missed two threes that I saw should have gone in but just didn't. I think he's fine now and will be happy to see him taking some of Devin Brown's attempts away. Rasual was pretty cold (1-7 3PTs) but for some reason I'm okay with him taking threes as long as Devin Brown doesn't. Once again I have to ask what Mo Pete is doing while 'Sual and D-Brown chuck it up. Also, Julian Wright had an embarassing game. He wasn't bad (8 rebounds) but it was just embarassing. He missed 3 dunks (ouch), one of which was pretty much on a fast break, albeit not as ugly as this, but still, ouch. Although I'm not disappointed with him, he played some good D and grabbed the rebounds.

- This loss puts the Hornets in a relatively bad position. Luckily the Rockets and Jazz both lost, keeping the Hornets the 6th place spot, 1/2 game behind Houston and a game behind Portland. Unfortunately, the Spurs won yesterday, putting them 2 whole games ahead. The remaining Hornets schedule is also not easy, with two extremely important games against Houston and the Spurs. The playoff race is not going to be over until the last game of the season, and what's slightly unnerving even if improbable is that only 3 teams in the West have yet to clinch a spot. If the Hornets go on a skid and Phoenix is hot for a few games, we might even not land a spot. Even though that's probably impossible, it still scares me...

Next game is against the Jazz, which is pretty imporant, considering the Jazz are fighting for a higher spot and are 2.5 games behind us. Geaux for tommorow!