People have a lot of vague conceptions about the playoffs. It's more physical. More defense is played. Half court offense is far more prevalent than transition offense. It's harder to shoot, since attempts are contested more heavily. Et cetera.

Time to put some numbers on those claims.

Below are a bunch of graphs. They depict team performance in a variety of categories during the last decade. The comparisons are between playoff teams during that respective regular season and that playoffs. This way, an absolute comparison can be made, and the noise created by lesser, non-playoff teams is ignored. 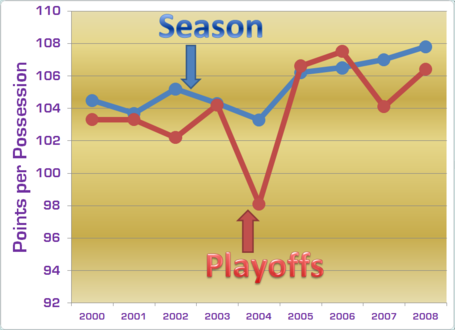 This confirms something we often hear: teams step up their D in the postseason. 2004 produced a stunning rate of defensive efficiency while 2006 seems to have been an aberration. Overall, though, offensive gameplans need to be more complex than in the regular season. 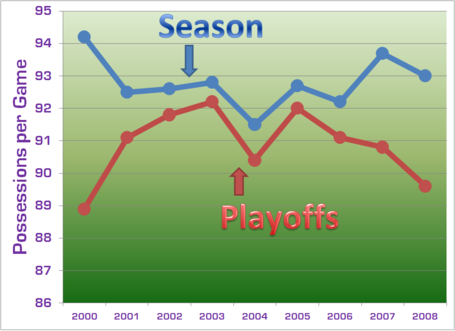 Another one that confirms an anecdotal observation. The pace is significantly slowed in the postseason. It's also interesting that slower paced teams have performed very well in the playoffs through the course of the last decade while faster pace teams have tended to fizzle out (with the exception of Los Angeles). It's another question entirely as to whether that's due to those slower pace teams being inherently better or slower paces teams adapting better to the natural slow pace. 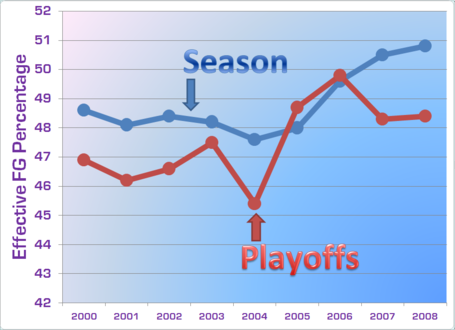 This goes hand in hand with decreased offensive efficiency. Field goal defense seems to be the number one component, leading to that decline (especially consider that teams improve turnover rate and rebound rates stay almost constant). I should note that three point percentages stay literally identical in the playoffs and the regular season. This suggests that teams convert fewer attempts closer to the hoop and in the paint; conversely, defenses converge on driving players far more quickly. 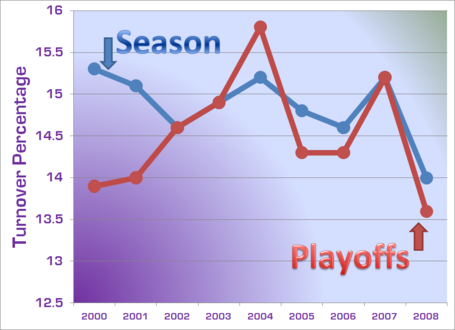 There's no real difference in playoff and season turnovers. It seems counter intuitive at first. However, the slower pace could explain some of this, since teams are far more deliberate in how they use their possessions. Thus, turnover rate is one of the few offensive statistics that isn't adversely affected. 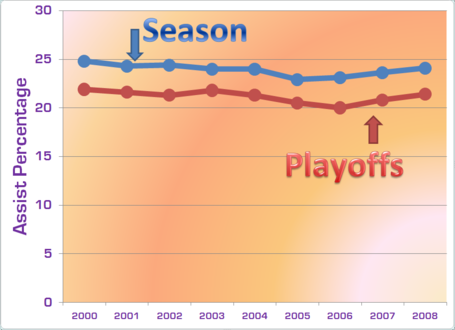 This one's either very surprising or very unsurprising depending on how you look at it. It's strange because there's a tendency to think of assists and turnovers as "opposites." On the other hand, it confirms what we see observationally: there is a lot of one-on-one basketball being played in the playoffs, between "superstars" and "shut down defenders." Ball movement is a lot more difficult to generate, so a team that can swing the ball around constantly would seem to have a valuable advantage. 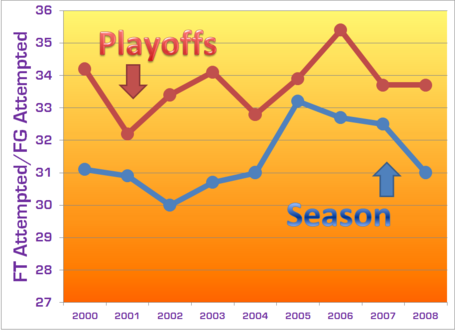 FT/FG is generally a good indicator of whether teams are driving to the hoop or settling for shots. So this could be telling us that players are more likely to drive than to settle. On the other hand, it could also be telling us that teams get into the penalty earlier in quarters. Who knows. 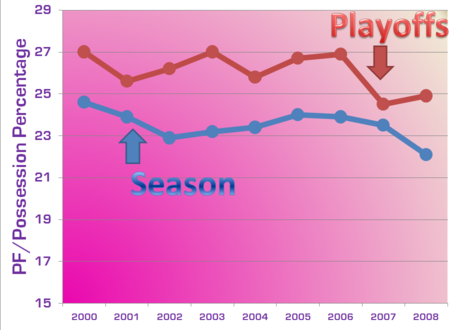 In essence, the NBA game is quite markedly different in the postseason. All of these differences are fueled by heightened player intensity; these graphs are simply a way to quantify how that intensity manifests itself on the floor. Why that intensity change exists is a question for another study, probably more biological in nature (adrenaline, etc) than mathematical.

A team that wants to make a deep run should be able to play at the naturally slower pace, should have good shooters, should have good ball movement, and should be able to hit free throws. Those all sound like things teams should be doing anyways, but those four aspects are specifically magnified. Factors like rebounding and turnovers can play a huge role from a matchup perspective, but they aren't amplified in the translation from season to playoffs. In the end, the best team is always more likely to win. But in close matchups, excelling in playoff-suppressed categories can push a team over the top.