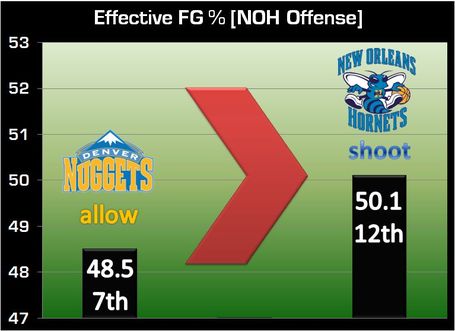 The Nuggets are one of the elite field goal percentage defense teams in the league (something Gregg Popovich utilized to allow SA to dominate for most of this decade). They close out shooters well, Nene is terrific on help defense, and their second unit is just as fearsome defensively. The Hornets' overall shooting took a hit this season; whether it was Peja slumping, Tyson slumping, West slightly off from the floor, etc., there was plenty of blame to go around in the regular season. The Hornets will be faced with the tough task of righting the eFG% ship against a terrific field goal defense. Advantage Nuggets. 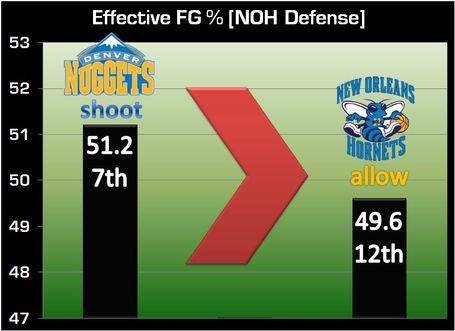 The Hornets weren't too shabby on the defensive field goal side themselves. Despite plenty of midseason problems closing out shooters, the Hornets finished right around league average at 49.6%. This figure would be far lower (thus, better) were it not for the Tyson Chandler injury. Minus the Repair Man, the Hornets allowed loads of easy buckets- layups, dunks, floaters- off of penetration. So this number could end up underestimating the Hornets. Nevertheless, the Nuggets are an outstanding shooting team. They've got at least five guys who can create quality shots for themselves- Billups, Anthony, Kleiza, J.R., and Nene. The advantage again goes to Denver. 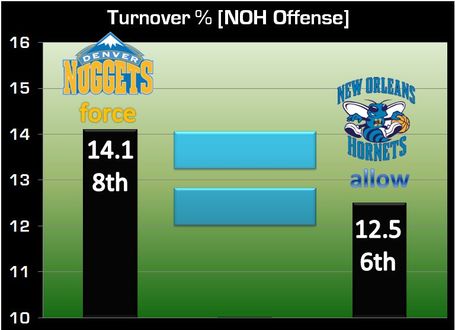 Last year, the Hornets finished as the top ball control team in the Conference (tied for first in the league with Toronto, if I remember correctly). This year, they stumbled out the gates. Chris Paul had (relatively) high turnover rates, David West struggled to take care of it, and the bench coughed it up all over the place. Since around mid-March though, the Hornets have surged back into the top 10 of turnover rankings. They simply don't give it up too often. Denver is a very aggressive defensive team. They'll play the passing lanes, seeking steals, and seeking to ignite the fast break. That style served them well in the regular season, as they forced the 8th most turnovers per possession in the league. This is a toss up, with probably a slight edge to the Nuggets, given how many turnovers Chris Paul averaged against them in four matchups. 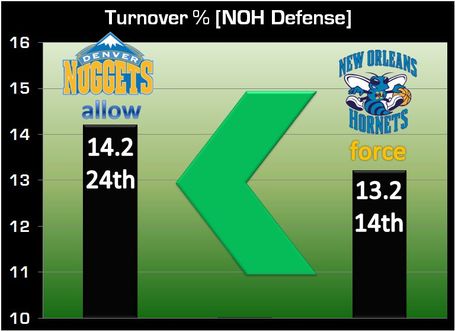 Turnovers are the real shortcoming of Denver's high octane offense. They're one of the most risk-taking teams in the conference. Defensively, it didn't hurt them too much this year as the Nuggets ceded very low field goal percentages. Offensively, it has hurt them as they rank only 24th in the league in ball control. New Orleans didn't force nearly as many turnovers this year as it did last, but they still have the league's top theft man in Chris Paul. As a team, the Hornets finished slightly above league average in forcing turnovers, and that should be more than enough against this Denver squad. A pretty significant advantage for New Orleans. 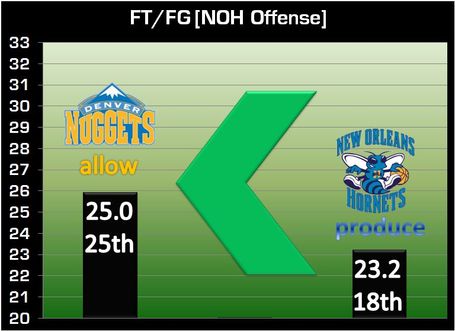 The Hornets certainly stepped up their foul drawing in 2008-2009. While 18th in the NBA doesn't sound too impressive, it is a huge increase over 2007-2008's last place finish. The charge was led by Chris Paul and David West, who each made concerted efforts to get to the line. The FT/FG statistic also does not take into account the fact that New Orleans is one of the top free throw % teams in the league. Couple in the fact that Denver fouls a ton, and this is another advantage for New Orleans. 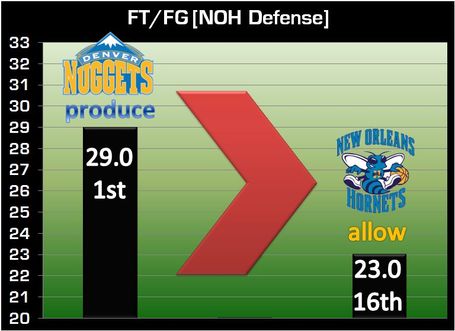 FT/FG on defense will be the real problem for New Orleans. Nobody gets to the line like Denver does; in fact, nobody is even close. Much of that is due to what I mentioned above- between Smith, Melo, Chauncey, Nene, and Kleiza, they have five guys that can legitimately create open shots at will. Shot creation goes hand in hand with foul drawing. James Posey, Chris Paul, and Tyson Chandler will be the keys defensively. This is a huge advantage for Denver, and the series could get out of hand quickly if Byron Scott doesn't adapt well. 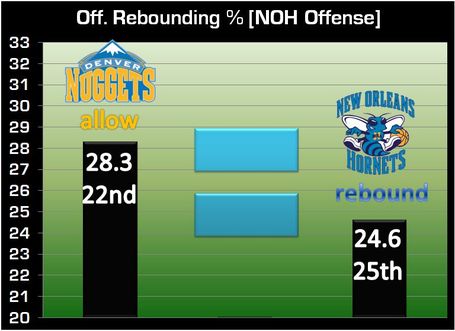 Denver is a poor defensive rebounding team. Unfortunately, the Hornets haven't torn up the boards either on the offensive end. Much of that is due to the absence of Tyson Chandler; however, Chandler didn't give much indication in the San Antonio game that he'd be tearing up the boards any time soon. Essentially, the points will be there on the offensive glass for the taking. Whether Sean Marks, Hilton Armstrong, and Melvin Ely can actually get some O-boards is another question entirely, rendering this matchup even. 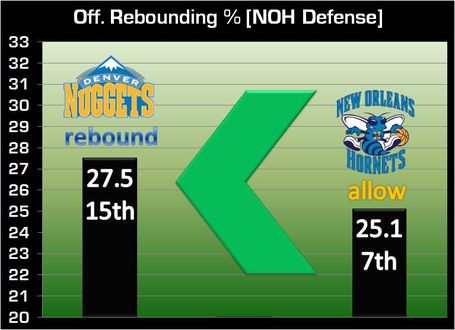 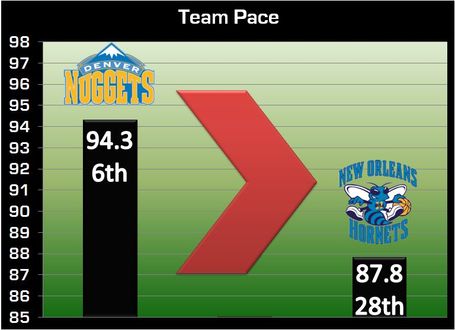 I put the "greater than" symbol on Denver just for fun, but it doesn't really mean that one pace is better than the other. The difference in team pace is remarkable. It will be interesting to see if Byron Scott tries to force Denver to play a half court game, or whether he lets Chris Paul and Co. run with the Nuggets. My feeling is he'll hedge towards the former, while allowing the Hornets to take limited fast break opportunities when the present themselves. The fast break game will be far less integral to the Hornets' offense in this series than it would be against, say, Houston.