Share All sharing options for: The Hornets-Kings Saga Continues 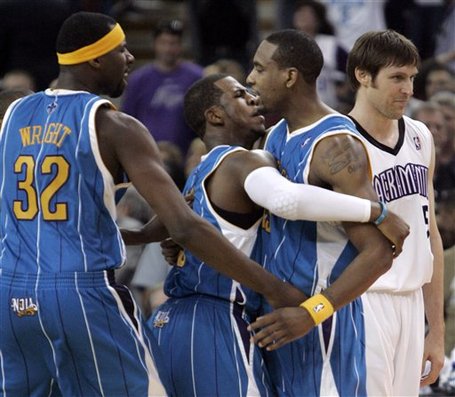 Think this shot was huge? It was actually full of sound and fury, signifying nothing.

For the exploits of a single game pale in comparison to the rivalry itself. Would one compare the tale of David and Goliath to the Old Testament itself? Or the tale of the Cyclops to the Odyssey? Verily no, for they are but minute facets of far more grandiose works. To talk about Rasual Butler or David West or other such insignificant creatures is to miss the forest for the trees. What good is a recap of a single game when a recap of an era is called for? It is only fitting that we recount the vicissitudes of this never ending saga-- the famed tale of the Hornets and the Kings-- on this holiday among holidays.

For much of their respective histories, the Hornets and Kings lived in peace and tranquility (Figure 1). Sure there was the odd invasion that proved a bit too Pyrrhic, or the occasional friendly-firing trebuchet. Among such peace-loving allies, such trivialities could be easily forgiven. But what transpired in May 1998 was a crossing of the line. 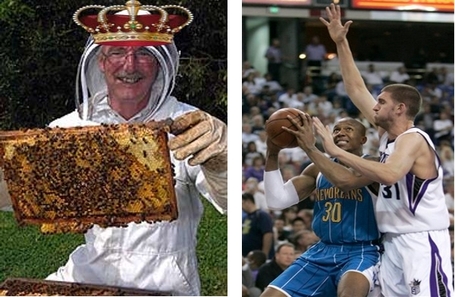 Figure 1: The geniality displayed between King and Hornet (left) is certainly atypical of modern times.

When the Kings grabbed Vlade Divac straight out of the hands of the Hornets, most observers were shocked, the critics vociferous. "It's like stealing candy from a baby!" lamented the coach of the Seattle Sonics, George Karl. "Mmm, candy." The long-established Sacramento franchise had chugged down the very lifeblood of its victim in a single helping. To one and all, the organization turned overnight into a collection of thieving slimehogs. The pathetic irony of one of the largest market teams in the country stealing a bona fide superstar from a small, rural farm town was not lost on most. It was the rich getting richer, and the poor getting Charles Shacklesford.

The Hornets chose to retreat and lick their wounds. Some smart drafting landed them Brad Miller, a budding star and a very mellow fellow, who bluntly spoke his mind, weeding out his competition with blazing speed and the ability to get high. While the Hornets scraped the bottom of the barrel for talent, the Kings continued to show now mercy for their small market brethren, gobbling up the likes of Chris Webber, Bobby Jackson, and highly controversially, Doug Christie. In fact, countless players from all walks of life plied their trade for the Kings, unable to  resist the allure, drawn as moths to a lamp. Sacto traded away high character guys (Jason Williams comes to mind), acquiring trouble-making rapscallions at every turn. Brad Miller himself turned up on the left coast.

That was when one man decided he had had enough. He was a man of incredible vision, and he saw the karmic retribution looming in the Kings' future. Rick Adelman once remarked, "Peja Stojakovic is truly the Galileo of Our Times," and he could not have been more right. Against all odds, Peja slipped out the back door, stumbled across the freshly cut grass, hailed a cab, and just like that, he was gone. It was an arduous journey that saw him brave the horrors of Indiana, but by nightfall of the next day, he was a Hornet.

And what a joyous day it was. For eight excruciating years, the Hornets had bided their time. The defection of Peja signified the end of what historians now consider the transition between the Dark Ages and the Bright Pejas. The Hornets were back on the attack; they won a staggering 6 out of their first 12 battles with Peja. Startled by the Hornet onslaught, the Kings began to drop like flies. Doug Christie traded. Chris Webber traded. Mike Bibby traded. Bobby Jackson, taken prisoner. In their malnourished and weakened state, the Kings were forced through the ultimate ignominy of watching the laughingstock and perennial loser Lakers make off with their crown jewel- Vlade.

Today, the streets of Sacramento are filled with angst and despair, anarchy and chaos. Darkness and danger lurk around every corner. The citizens live in constant fear lest a shot, such as that fired by the Butler, should break out in the dead of the night. For they have been vanquished. 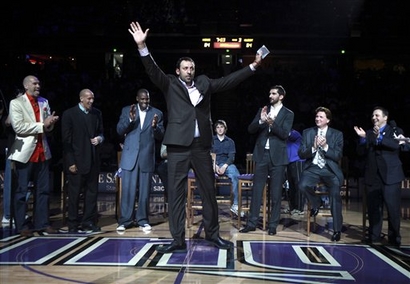 Former members of the King Empire- Scott Pollard, left, Doug Christie, second from left, Chris Webber, third from left- look on as Vlade Divac, center, waves two hands in the air to signify defeat at the hands of their oppressor, third from right.