Where Does Rasual Butler Fit on the NBA's SG Spectrum?

Share All sharing options for: Where Does Rasual Butler Fit on the NBA's SG Spectrum?

Like most of you, I went through a heavy case of Mo Peterson withdrawal in November/December. He was one of my favorite players on the team- great guy off the court, knew his role on the floor. It took me a while to acknowledge that Rasual Butler wasn't simply keeping the starting SG seat warm for Mo.

Sool has certainly come on strong these past few weeks- the most trying portion of the Hornets' season thus far. Yet I still hear opposing road commentators say things like "yeah, good luck winning in the playoffs with Rasual Butler starting at the 2." Anecdotally, this seems sort of valid. Butler was a 52nd overall pick, and what little noise he did make in his first 5 years was almost entirely erased by a forgettable 2007-2008.

A stroll through his B-R page doesn't reveal many flaws in the said assessment. Butler shoots well, but his PER rates at just 13.2. Offensively speaking, the stats would seem to indicate that at best, Butler is well below the league average.

However, t's important to consider Butler against the backdrop of the entire NBA shooting guard spectrum. Clearly, SG's have different roles across the league. Some function as playmakers (B. Roy), some function as scorers (K. Bryant), some function in more understated roles, and on and on.

One way we can assess the relative size of a player's role in his respective offense is usage rate. Typically expressed as a percentage, it's an estimate of how many possessions Player X uses per 100 team possessions. So for example, a usage rate of 25% indicates that a player "used" one in every four possessions by way of attempting a shot, getting to the line, etc. Usage Rate (USG%) can undervalue the role of point guards (to be discussed later this week), but can be a very effective tool for measuring shooting guard responsibility. 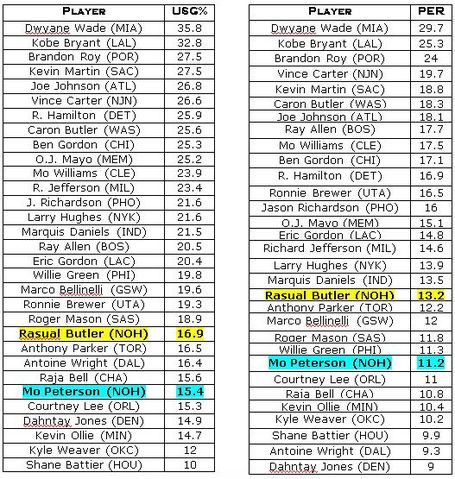 Listed above is every current starting shooting guard in the NBA. The left column is ordered by Usage Rate, and the right by PER. The right column certainly doesn't paint a rosy picture of Butler. While he has outperformed Mo Peterson (Mo's listed stats are from 2007-2008), he barely cracks the top 20 of starting 2 guards.

But the PER table means nothing without being coupled to the Usage table. There is one underlying criterion that dictates how the usage table plays out: how much does Team A "need" Player B? The further we go down the list, the less the player's team needs that player. Now certainly there are exceptions- Courtney Lee (ORL), Dahntay Jones (DEN), and Shane Battier (HOU) all stand out as players who cannot be jduged on Usage Rate alone (due to their defensive contributions). For the most part, the "need" aspect is dead on. Dwyane Wade is the most important shooting guard in the league, and one of Kyle Weaver or Kevin Ollie is perhaps the least needed shooting guard in the league.

It becomes necessary to establish a cut-off point. At what percentage can we say a team relies on its shooting guard more than the average team would? The answer lies in the way USG% is defined. Think of it like this: at any point in a game, there are 5 players on the court. If each of them had the exact same level of responsibility in the offense, they'd each use one possession in 5. In other words, each of their usage rates would be equal to 20%.

The USG% by position varies from team to team- New Orleans relies on Chris Paul and David West heavily, and thus, both their USG%'s are high. Cleveland relies on its SF position, and so on.

When a SG gets fewer than 20% of the on-floor possessions, you can make the case that he's a role player, offensively speaking. It doesn't make sense to compare SG's with more prominent roles to role playing SG's.

This next table is of all starting shooting guards using fewer than 20% of possessions, ordered by PER: 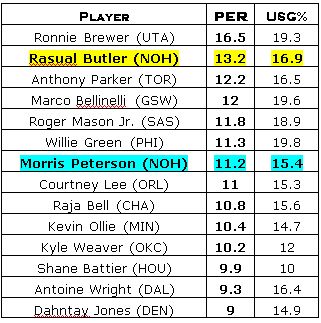 The conclusion is clear. Rasual Butler is by no means a "great" NBA shooting guard. In fact, virtually all measures indicate that he's in the bottom 50% of starting SG's. But relative to his specific role, he's the second most efficient SG in the NBA behind Utah's Ronnie Brewer.

It's become exceedingly clear in the last decade that NBA team construction is not solely about going out and getting the best players. It's about finding the best players to fit specific roles. Place a guy who needs a 20%+ usage rate to be successful on New Orleans, and the roles and efficiencies of David West and Chris Paul would be subject to variation. That isn't inherently a good or bad thing, but it would undermine the elementary basketball paradigm that Jeff Bower and Byron Scott strive to work under.

Based on the type of offense the Hornets favor- leaning heavily on a point guard and power forward- Butler is actually one of the best options in the entire league available at the 2 spot.