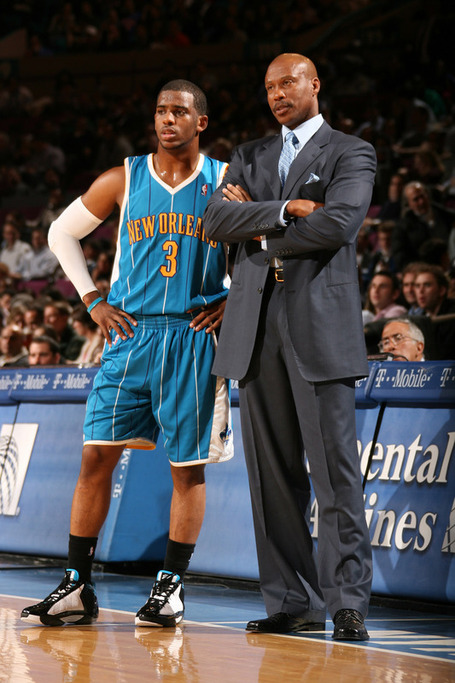 It don't take Bill Simmons to read the despair in those eyes.

Something was different about tonight. I mean we've lost to bad teams all year- the Wolves, the Cats, the Warriors, even these same Knicks. But I didn't feel the least bit surprised at any point in the game. I didn't feel a sense of despair when Chris Paul ceded possession after possession to Julian Wright iso's and instead chose to stand in the corner doing nothing. I didn't feel a sense of hopeful desperation when we hit a couple shots to draw within single digits at the end. And I didn't feel even a little sadness when Chris Duhon was the guy getting the victorious post-game interview.

Between last year and this year, something has been lost. There is certainly a quantifiable aspect to that "something"- statistics, injuries, and so on- that I've covered in the past. There's also a qualitative aspect to it. There's a sentimental attachment I felt so strongly a year ago that simply no longer exists.

And how can it? James Posey throws the ball at a ref after making (yet another) lazy defensive play. Chris Paul, an Olympic gold medalist and arguably the best player in the game, gets in a shouting match with a random bench player on a mediocre team. Random iso plays drawn up for guys like Mo Peterson, with Paul and West on the floor. Even with the loss of Chandler and Peja, I think we can all agree that this team is playing far below its true talent level.

Is that on the coach? Is that on the players? Is it just on a defeated mindset in general? I don't know, but it's different. It's something we haven't seen from the Hornets in years.

Anyways, I guess I'm supposed to talk about the game or something.

From a statistical standpoint, it's pretty clear what happened. NYK went bonkers from beyond, aided by 99% of their threes coming without a defender within 10 feet. They out eFG'd us by nearly a full 10%... which is huge. Massive. Insurmountable in many ways. We did rebound better, take better care of the ball, and play mostly to a draw from the line, and still lost by double digits. It's why shooting is the most important factor. Get outshot by 10%, and there's not much hope left.

David West was the only positive tonight. 29 off 11-19 with 7 boards is nothing to sneeze at. He was the one guy that didn't give up down the stretch. That said, his weakside defense was nonexistent. With Chandler by his side, West is normally an average to adequate help defender. Without another big, his rotations are painfully slow. When he doesn't make it, there's no Chandler behind to erase the mistake.

While West was impressive, I was really disappointed in Chris Paul tonight. Two things especially stand out in my mind. First... can we please get over the thing where CP watches his teammates fail spectacularly for most of the 3rd quarter before becoming "angry" and taking over? Why can't he just take over in the 3rd quarter, before his teammates proceed to suck? I mean, we've been hearing for 3 years now about how Byron tells him late in the game that "he needs to be aggressive." Why does he have to wait for Byron and some poor play to be able to flip that switch? There were long portions of the third quarter where he literally passed the ball off and stood in the corner, watching Butler/Peterson/Wright run hideous isolations. The teammates-have-to-suck-first prerequisite for Chris Paul takeovers needs to end.

The second thing that annoyed me was the "fight" with KryptoNate. First off, CP was clearly having a horrible shooting night. So he was jawing at the refs all night long. In itself, I have no problem with the jawing. Sure, yell a couple times, get a few calls down the road, whatever. As long as it's kept respectful, that's fine. But Paul's scuffle with Nate was motivated by the fact he was struggling. The three he took midway through the fourth quarter (the one he bricked to the left) was clearly motivated by him wanting to show up Nate. With time on the shot clock, he randomly tried some fancy dribbling and then faded away over Nate Robinson. Seriously, who fades away over NATE ROBINSON? Come on CP. You're better than that.

And... James Posey in closing. What. The. Hell. He started off promisingly... and then it all fell apart. Couldn't even pretend to keep Wilson Chandler in front of him. Or Quentin Richardson. Or Larry Hughes. Everyone was quick stepping by him, and the whole team suddenly turned into the New York Tony Parkers. At the end, there was him throwing the ball at an official in frustration, earning the auto ejection. His explanation after the game was calling it a "bounce pass." Right. Look, I'd like to defend James Posey any way I can. I want to give a Hornet the benefit of the doubt, always. But... seriously? Throwing the ball at anyone, let alone the ref, is totally not cool. I don't see how someone could watch that play and not conclude that he was, in fact, hurling the ball at the ref.

A post coming tomorrow on James, and then the Spurs come to town on Sunday. Maybe it is darkest right before it goes pitch black.