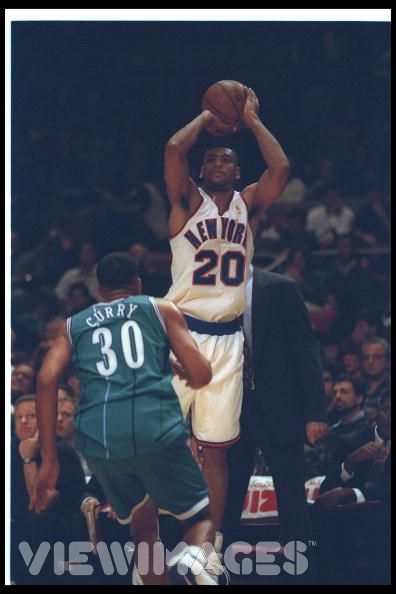 For starters, does this picture make anyone else sad? Feels like just last week that Allan Houston and Dell Curry were out on the courts. I feel old.

Anyway, if you haven't heard yet, the Ceiling Fan is out 1 to 2 weeks. Judging from the "stabilizing boot," it would appear that the 2 week side is more likely. In all probability, the 1-2 week assessment means he's done for the regular season. How effective he would be in a postseason series is anybody's guess. As for Peja... still no word on him. The last story indicated that he had shooting pain in his legs, stemming from his back. Doesn't take a doctor to realize something sounds very, very wrong there.

What does it all mean? Well, we can all but kiss homecourt advantage good bye. Between our horrific performances against other contenders, Houston and S.A. playing very good basketball, and our injuries, we're probably staring at a 6 or 7 seed. The first round matchup could still end up being anyone... San Antonio, Houston, Denver, Utah, Portland... even L.A. if we slump some more.

So it's a somber state of affairs the Hornets find themselves in, on the way to New York. The Knicks are coming off an embarassing loss, where an Al Harrington hanging-on-the-rim penalty cost them a probable win. Still, if Quentin Richardson and Wilson Chandler get hot against James Posey's "defense," things could become very rough.

I'll be watching this one solely to see Chris Paul do his thing. Hey, looks like it's 2005 all over again.