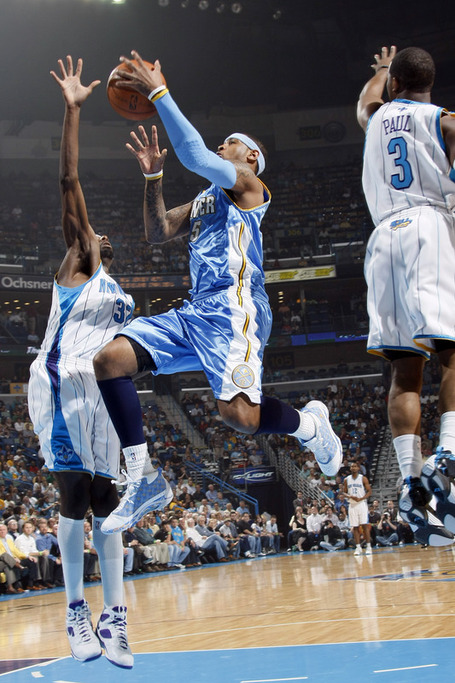 Bleh. That one really stung.

Tonight, the Hornets had a chance to make up some ground in the Western Conference standings as well as settling a tie-breaker with one of the second tier team (AKA not the Lakers). But CP and company were unable to capitalize.

A quick perusal of the stats doesn't (at first) point to any one reason for the loss, as the Hornets led most of the team statistical categories and finished pretty close with their percentages. But a closer look reveals the true culprit: ball handling.Tonight, New Orleans gave the ball away 17 times (compared to to Denver's 10). This led to a massive disparity in shots attempted from the floor. Sure, both teams shot around 43% for the game, but when your opponent puts up 81 shots to your 68 there's not a whole lot you can do to make up that ground.

Tonight was one mistake after another. And the Nuggets took full advantage of our constant miscues, getting hot at all the right moments and putting the game far out of our reach. I still like our chances against this team if we were matched up against them in the playoffs, but we've got to find a way to lock down their scorers and play our own pace if we want to even stand a chance at winning.

We've got a rough schedule coming up to close the season, and these last few games haven't done much to inspire a lot of confidence. I'm just hoping TC and Peja's return will spark a new life into some of our guys.

Composed to: Talk Talk's Laughing Stock (I needed something to calm me)

The opponent's take: Pickaxe and Roll