Share All sharing options for: Game 70: Hornets vs. Nuggets Preview/Thread 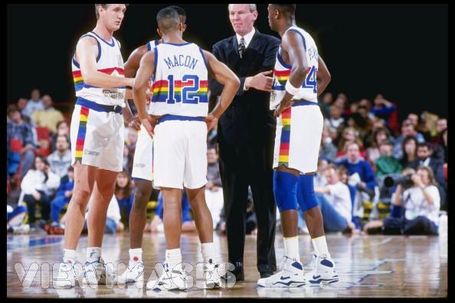 Hard to believe we're already into the 70's, and only 13 games remain. The Nuggets come to town today, and we're offered some hope at redemption for last Monday's beating at the hands of Houston. The Nuggets are ahead of us in the standings, but actually percentage points behind us. This is due to their lead in the Northwest Division. Even if we beat them tonight, we'll still be stuck outside the Top 4... it's Houston and San Antonio that we really need to catch.

Things look to be considerably easier, as Denver will ostensibly be missing its (arguably) best offensive and defensive player in Nene. I expect a Kenyon Martin cover on David West (where he normally plays some tough D), but Tyson Chandler figures to have more space to work with. For all the talk about New Orleans' rejuvenation with the reinsertion of Chandler, TC is still struggling, relative to last year. He's still fumbling with alley oop passes, not jumping as high on tap outs, and not running the break as regularly. Perhaps tonight will be a chance for him to turn it around, as both he and Peja Stojakovic could return.

The Hornets' defense has been steadily improving over the last few weeks, so they should be able to deal with a Nene less Nuggets squad (though Denver is the 8th best offense in the league). The offensive side of things is more problematic; the offense has been sliding downwards at the same rate, as the Hornets' 5th ranked offense of last season is now dangerously close to league average.

Defensively, I'm looking forward for the Hornets to capitalize on steal opportunities vs. a poor ball-handling Denver team, and pound the offensive glass against a poor defensive rebounding team lacking a top rebounder. Problems may arise in the form of foul trouble; Denver is far and away the best foul drawing team in the NBA. This is primarily fueled by Carmelo Anthony and Chauncey Billups, so CP3, Julian Wright, and James Posey will have their hands full.

Either way, this should be a great one.