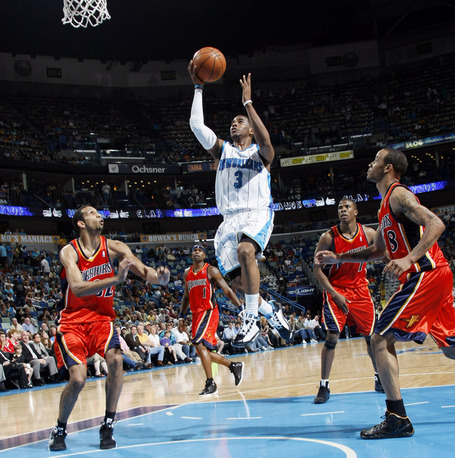 Great game, no question. The Hornets were able to pull out in front pretty quickly (up 7 by the end of the first), and then held a 20 point lead until latter half of the fourth. It would have been nice to see them hold that margin until the end, but Golden State started hitting shots that they were bricking for most of the game, so it's hard to complain.

The Hornets did what they could to control the pace, but eventual settled into Nellie-ball using 10+ possession more than usual (game pace was 97 compared to our usual 85 or so). But you know what? It worked. It helped that the Warriors looked a little out of sync, often running into one another, but I was generally impressed with the offense all night.

Probably the biggest story of the night was the success of the bench in the second quarter. Not only did they outscore the Warriors 11-6 in the first 6 minutes, they gave CP an unprecedented 9 (Nine!) minutes of rest. It was a beautiful sight to behold.

Detractors might note that our bench was playing an even weaker bench since the Warriors were missing 2 starters in Biedrins and Crawford. But to that I say that A) we were still out 2 starters and B) their bench features Corey Maggette, who's way better than anyone we have coming off the pine (no matter how healthy we are). Regardless, even if this performance is just a confidence booster for the second unit—and it should be—that would be a victory.

In the end, the Warriors shot such a poor enough from the field (39.5%, 21.1%, 77.8%) that no number of possessions could have saved them from the onslaught of Chris Paul, David West, and Hilton Armstrong (yes, you read that last name correctly).

Composed to: Tift Merritt's Another Country