A Season for the Ages

Share All sharing options for: A Season for the Ages

With the Madness of March in full swing, the NBA takes a back seat for a little bit. Nonetheless, it's worth pointing out that we only have 15 or so regular season games left in a very, very historic season.

Why is it so record breaking? LeBron James, Dwyane Wade, and Chris Paul.

In the three point era, there have been just nine 30+ PER seasons. All nine occurred in nine different seasons; in other words, any one season witnessed one 30+ performance at most. Then 2008-2009 arrived. With LBJ comfortably above the threshold, Flash playing out of his mind, and CP3 recovering to the 30+ levels he maintained all year with the return of Tyson Chandler, there's a very good shot they all finish at 30+. Illustrated graphically: 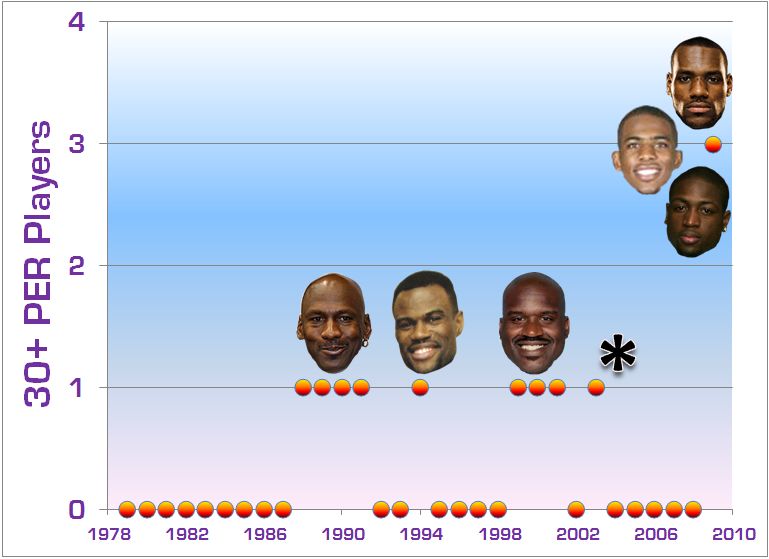 *T. McGrady couldn't make it onto this graph, citing injury and a crippling fear of New Orleans.

First of all, you might notice that 30+ PER seasons only happen once every three years. They're quite unique. Second, you might be wondering, "Why 30?" Why not 29.5 or 29.3 or 29.7894? Isn't 30 just some arbitrary number? It is. But if you extend this out to PER's of 29, or even 28.5, the results are pretty much the same- it's not a common occurrence. I picked thirty as a round number landmark for a very elevated level of play. In 29 years, exactly four players reached the landmark. This year, we're about to see three new players do it at the same time.

So yeah. Even as you set your bracket ablaze and hurl insults/remotes at your TV, keep an eye on New Orleans, Cleveland, and Miami. That's where the real Madness is underway.