Well, Hornets' games clearly aren't for the faint of heart. 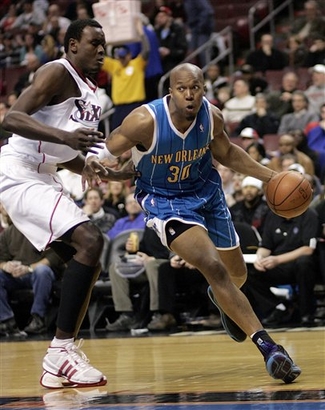 Not content with merely one player of the week award, David West picked up where he left off. Chris Paul also had a game very similar to his last- an overall subpar performance before making the big play down the stretch. It's interesting how I've come to view games. If this (or the last) game had happened early in the season, I would've been very disappointed. I would've lamented the margin of victory, the strength of opposition, the defensive meltdowns, regardless of the fact we won. At this point, I'm just thrilled we won. The Hornets may or may not get their act together in the future (by no means does this 5 game streak indicate that they have), but every win is crucial. 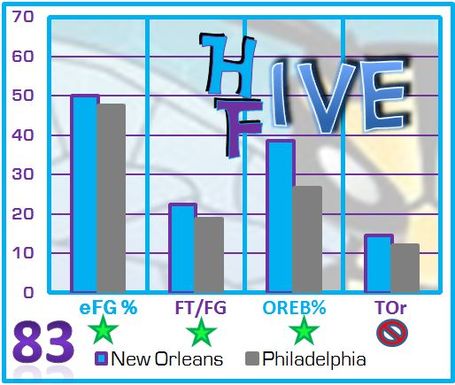 The factors point to a great overall performance. We outshot the Sixers, we were more aggressive offensively, we outrebounded them, and though we didn't force many turnovers, we didn't commit too many ourselves. The thing that stands out most from the above graph is the pace: 83. That's extraordinarily slow, especially when you consider how much running Philadelphia did. While our offensive efficiency was very high, we did endure many ugly possessions. In general, it's something to be mindful of. The overall team pace has been trending steadily downwards since December.

The fast break kept Philly in the game. The way they ran the break was definitely unconventional. Typically, you have a guard keep the ball until he's forced to make a decision in the paint area. Tonight, the Sixers routinely threw dangerous passes from the half-court area and reaped the rewards. I don't know if this is something they do on a regular basis, but it seemed to catch the Hornets by surprise.