Here's a prediction: people are going to start talking about Jannero "the General" Pargo again. Between the struggles of the Hornets' bench, Pargo's potential return to America in the summer, and the General's brother getting some March Madness airtime (Zags are going to the championship game, book it)... lots of storylines involving the General right now.

But let's nip one of those stories in the bud before it ever gets started. Jannero Pargo's absence is not the reason for our struggles, because Antonio Daniels has been just as good, if not better. 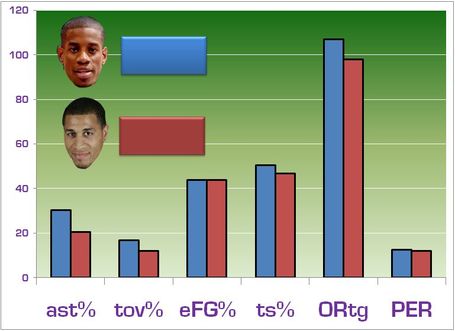 Daniels is far and away the better passer, somewhat offsetting Pargo's better handles. I slammed Pargo's horrendous floor percentages last year, and Daniels is just about equal. However, the difference is that Daniels gets to the foul line about 1.5 more times per 36 minutes. The result is obvious in Daniels' higher true shooting percentage.

There's a lot of blame to go around on the bench, but AD has been solid.