A Somber Wednesday, but a Shiny Graph!

Share All sharing options for: A Somber Wednesday, but a Shiny Graph!

Tough being a Hornets fan right about now. We had so many expectations, and now we really don't have anything to blame- not injuries, not scheduling, etc- but some major underachieving.

But it's time to move on. I think I got most of it out of my system in the CHI game recap; like chandlerfan said in the game thread, it's time to simply sit back and watch how far this team can take us. No huge expectations- if we win, sweet, if we lose, fine.

On that note, here's an interesting comparison that many people are bringing up.

Before I get started, I should point out this FanPost from nikkoewan. It describes a way we could use Peja off the bench, minimize CP's minutes, and still put out a very efficient team. And the chart is pretty cool.

The idea of Peja off the bench is one that was actually brought up last year, during the playoffs. I remember someone on here (or maybe it was me) remarking that since Bruce Bowen shut down Peja so easily, it might be worth having Peja coming off the bench and matching up with a lesser defender. It's probably a more viable option now than it was then.

I've been brushing aside the common sentiment that Peja's absence has significantly impacted the team. With Butler shooting the ball so well, and JuJu throwing down a few dunks here and there, Peja's absence wasn't among our biggest issues. But the numbers do suggest otherwise. 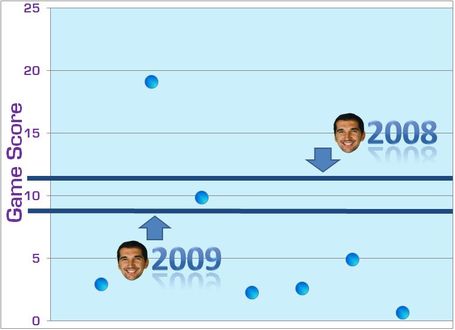 This is a graph of Julian starts by Game Score. Julian's Game Scores are the little blue dots, while Peja's 08-09 and 07-08 season average Game Score are drawn in. It's a small sample thus far, but Julian has only outplayed Peja's average season outcome twice in his starting stretch. He's only outplayed Peja's averages from last year once. Overall, Peja's absence is probably a lot more of a hinderance than I originally gave it credit for.