Yet again, there's a ton of stuff we could complain about, but at least it's another W. 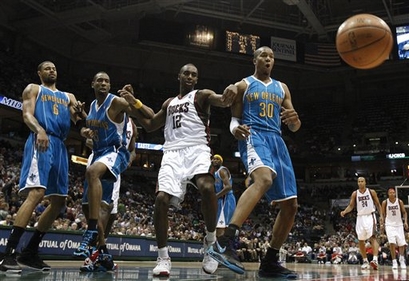 Before diving into the recap, I should note that Hollinger's forecasting system is beginning to pick up on what I alluded to a couple weeks ago. The Hornets' closing schedule is weak compared to other contenders, so we're in a good place right now. The Playoff Odds now have us finishing 3rd in the West. Monday's game against Houston will be all kinds of crucial. 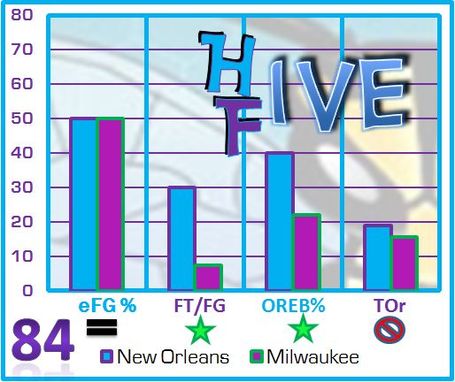 The reasons for the win are pretty obvious. The FT/FG and OREB% discrepancies were just too massive for the Bucks to overcome. They did take better care of the ball and match the Hornets shot for shot (both teams at a dead even 50.0% eFG%), but it wasn't enough.

The FT/FG dominance is, of course, highlighted by Chris Paul. CP3 finished 12/12 at the line, while Milwaukee took 7 free throws. As a team. You know things are going poorly when you draw 13 personal fouls all game. The Hornets aggressively got to the line and capitalized at an 88% clip. In terms of how points were scored, that's how we won the game.

Milwaukee's inability to create contact also lead to a massive margin on the offensive glass for us, in the form of Tyson Chandler. It's no coincidence that Chandler finished with 7 orbs, 17 rbs, and just one personal foul. West and Chandler (27 boards) nearly equalled the Bucks' team total (30 boards). The 40% OREB rate we finished with is just ridiculous. It means we were close to rebounding one in two of our own misses.

But then there was the bench. I suggested in the Game Thread/Preview that perhaps Byron should consider inserting another starter (Chandler) alongside David West with the second unit. Byron ended up doing the exact opposite, removing West as well, and leaving in no starters. The unit of Daniels/Brown/Posey/Bowen/Armstrong posted a -8 differential in just over three minutes. Brown and Bowen were quickly yanked for Butler and West, and Armstrong was pulled soon after.

All in all, I'm happy we tried a new look for the second unit. It didn't work, and we should see something new in Chicago tomorrow, but at least we're going through all our options. I don't have much issue with Byron experimenting against Milwaukee, etc. Not to say they're terrible, but it's better than experimenting vs. a Houston.