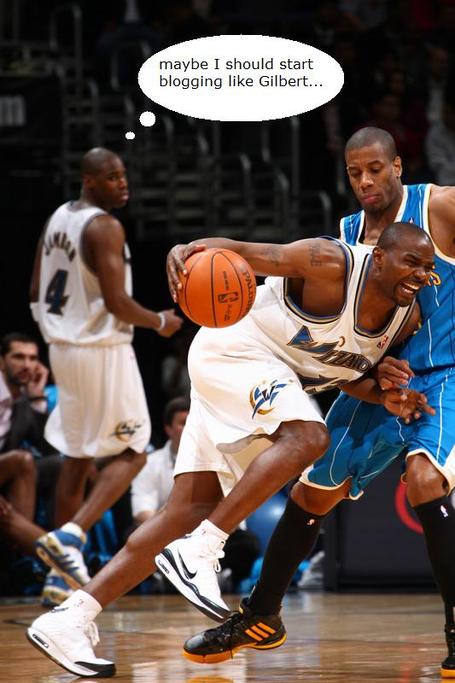 Chris Paul once again demonstrated why he possibly deserves an MVP and why he ought to be compared with the greats like Magic and Isiah (pre-coaching).

- The first quarter was extremely sluggish. It looked like the Hornets were just walking up and down; CP3 only had a couple of points and assists. Even going into the second, I was really surprised to see the Hornets go down 12. But, Chris Paul pretty much owned after that. He scored 10 points in an ensuing 12-0 run, cutting the Wizards' lead to just one at the end of the half.

- And the amazing-ness continued on to the third quarter, where the Bees outscored the Wiz 40-22. Chris Paul put up 14, 6, and 4 in the third quarter alone. Eventually, the Hornets jacked the lead up to 17 in the fourth, and apart from a couple of hiccups along the way, closed out the game.

- Regarding those hiccups, I'm really starting to worry about the bench. The bench almost blew the lead, allowing the Wizards to come back within 6. If it wasn't for some good shooting from Rasual Butler, this may have ended up a harder to win game. To reiterate: the Hornets may have lost a game to the worst team in the East.  The East. Looking at the non-adjusted "+/-" stats themselves, Hilton and Antonio Daniels were both -13 in 8 minutes of play each. I'm guessing  that with adjusted stats, the bench would be even worse.

- Mo Pete sat out for some reason, I saw him in uniform on the bench. After missing 20 games with that foot injury, perhaps Byron just wants to ease him back by first letting him get used to the uniform? I have no idea about Coach Scott's intentions; I couldn't see a reason why Mo Pete sat.

- Sean Marks had flu-like symptoms (seems to be going around: Mike James just had the flu as well) and Peja missed his fourth game due to his back spasms.

- As a side note, I was pretty happy with Razwall's play today, he had 21 points and stopped a couple of Wiz comeback runs with threes. I also found it slightly amusing that he took 13 three pointers.

- Taking a look around the league, this really seems to be a good day to be a Hornets blog writer (or fan, or player, or coach, or athletic trainer) as Utah, Houston, and Portland all lost. I believe this brings us up to the 4th spot in the West and a game out of 3rd. I find it very sad that no team in the West has clinched a playoff spot though.

That's it for this one, winning 8 out of the last 9. Next game in Milwakee on FRIDAY  THE 13TH so beware of that one. Ramon Sessions might just dish out 100 assists.