I had one eye on the Hornets and the other on my fantasy baseball draft. Both ended up sucking. 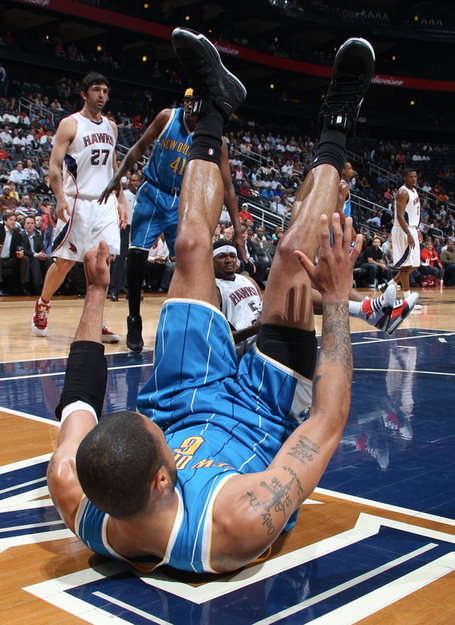 More after the jump.

It's rare to see the Hornets come out that hot and the finish so poorly. Generally, when we lose, we make sure to start losing as soon as possible. We start out flat, let teams jump up by 20 to 30, and then make feeble comeback attempts. Tonight, we played terrific offense and defense to start with, then fell apart.

That wasn't the only strange thing about this game. The Hornets, as expected, fell apart in the second quarter. What was odd was how that happened. Normally, it goes something like this: (1) backups come in, everyone groans, (2) backups proceed to suck, (3) backups are pulled and starters desperately try to earn back some of the lost points before half.

Tonight it went like this: (1) backups come in, backups suck, (2) starters come in, starters suck even more. Consider this: the lineup of Daniels/Wright/Posey/West/Marks (ie, the bench) registered a -5 in their 2nd quarter stint. The subsequent lineup of Paul/Butler/Posey/West/Chandler (ie, the starters) registered an even worse -8. While the bench certainly contributed to the -15 point differential in the 2nd quarter, the starters were even more to blame. Chris Paul turned it over left and right, David West barely grazed the rim on wide open shots, and Tyson Chandler miraculously forgot how to catch.

Since the other quarters went 28-20, 20-20, and 19-22 respectively, it was clearly the 2nd quarter that was to blame (again). It's just that this time, CP3 and Co. were perhaps more culpable than AD and Friends. On to some bullets:

I'd make some more snarky comments about our possessions pace resembling a handicapped snail crossbred with a octogenarian sloth caught in quicksand, but I've got to go engineer a trade for Albert Pujols. I'm out like Alex Rodriguez!