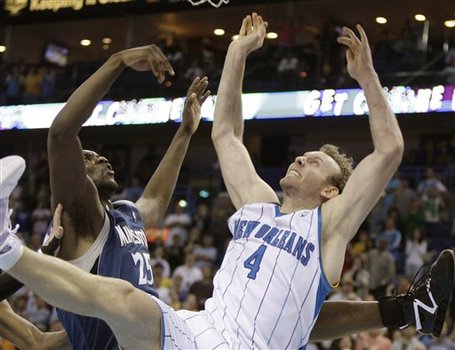 Ugly game, but we pulled out the W, so it's hard for me to complain.

Ok, so that's not true. I complain all the time. But scrutiny and "analysis" is why I'm here in the first place, so let's do this.

For starters, we probably don't win this game if Al Jefferson hadn't gotten hurt near the end of the fourth. Sure he only missed the final 27 seconds, but if Jefferson ahd been in the post, there's no way Marks would have iced (used loosely here) the contest with what my brother described as "the easiest dunk of his life." Not that we couldn't have won, but I think the chances would have plummeted significantly if we hadn't scored on that possession.

The T'Wolves came out strong early, owning us in the paint and on the boards for most of the first half. They also weren't afraid to get physical, though instead of taking one on the chin and pushing back, the Hornets got flustered and sloppy. A whole lot of pushing, shoving, whistles, and no whistles eventually led to David West's completely indefensible Flagrant 2 on Mike Miller. DX was frustrated about a no call on the other end of the court (or really hard fouls by Cardinal and McCants from earlier) and saw fit to attempt a "steal" by smacking Miller across the face. Oh yeah, and he didn't come close to touching the ball. At all. Dumb. Just dumb, David.

So, with the T'Wolves leading at the half and DX getting ejected, I kind of figured a W was pretty unlikely. Especially considering Peja was ice-cold from the floor, going 2 for 11. Apparently he used all of his allotted treys for the week against Toronto.

But, lucky for me (and every other Hornet fan out there), Rasual Butler and Sean Marks did not share my pessimism. Butler finished with 23, a team-leading 8 rebounds, 3 assists, 1 block, and 0 turnovers in 40 minutes of play. Meanwhile, Marks dropped 18 points to go with 5 rebounds and a block in 24 minutes and his performance pretty much equalized the points in the paint battle (which finished 36-34 in favor of Minnesota).

All in all, we got solid contributions from most of the squad, and they were able to seal the deal despite big games from Jefferson and Ryan Gomes. We've only got one more contest without CP and it's a very winnable game against the Grizz. Hopefully our boys can scrape together another W and give us little push heading into the break. You know, just in case Boston spoils Chris' return on Wednesday.