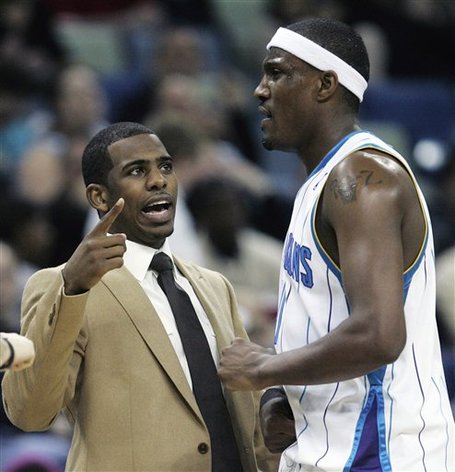 Coach Paul says, "If you don't start hitting shots, I will kick you, bench you, and then not feel bad about either."

Whew. We needed that.

Not so much to avoid the 5 game skid that might have been (although that would have sucked), but rather to prove to ourselves that we can play basketball without Chris Paul. It isn't always pretty, but tonight it worked.

After leading by ten through the first, the Hornets promptly mailed in the second quarter (to the tune of 32 to 16), relinquishing the lead by halftime. The boys were getting beat bad inside and our outside shots stopped falling all-together.

The Raptor held the deficit to 5 by the end of the third. By the time the fourth quarter started I was preparing myself to write another glum recap... but then the unthinkable happened. We founded our shot. In the fourth quarter alone, the Bees nailed 7 of their 15 treys, including a crazy run with 5 trey in 5 straight possessions.

By the time the fat lady sang four (4!) Hornets had 17 or more points and the Raps were sent packing. Of particular note was James "I found my shot! I found my shot!" Posey who finished with 17 points, 5 rebounds, 3 assists, 2 steals, and 0 turnovers in 33 minutes. You've got to go back six games to find night when Posey's hit more than 1 shot from the field. Good to have you back, Poz.

Of course, while we're commending great performances, we can't forget Peja, who went 7 for 11 from deep and finished with 28 points, 5 rebounds, 2 assists, 1 steal, and 0 turnovers in 44 minutes of play.

II suppose it should be noted (if you hadn't caught on yet) that neither team was particularly stellar on defense. We shot 48% from the field, they shot 51%. We shot 47% from deep, they shot 50%.

All in all, it was a solid effort from both teams that was ridiculously close in terms of stats (the treys made all the difference). Got to give credit to both teams for playing hard and leaving it all out on the court despite missing their best players (for the most part). What could have been an ugly and boring game turned out to be an exciting run down the stretch.