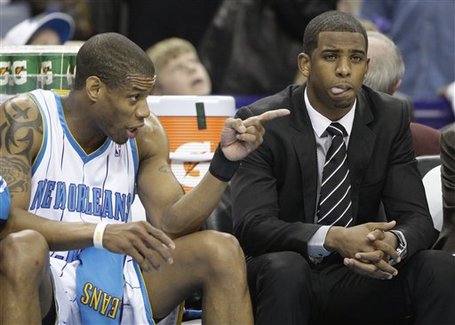 Let's not kid ourselves, that game went exactly the way everyone expected.

In a way it was a valiant effort from a group who was missing two extremely crucial pieces of their game plan. Sure, we are more talented (even without CP and Ty) than the score shows, but the Hornets

In reality, there was probably only a 25% chance we'd pull out a W, but the odds didn't fall in our favor. You know what did fall, though? Just about every shot the Bulls took. Ok, not "every" shot fell, but 56% of them did. Part of their prolific offensive attack could certainly be attributed to the slow-to-adapt defensive scheme we ran (or didn't run... or whatever), but you've got to hand it to the Bulls, they were nailing everything. Six of their guys finished in double figures and only one of that group shot less than 50%.

Meanwhile, the Hornets couldn't buy a bucket. They were clanking iron all night, often on completely open shots. Despite a strong showing from the line (30 of 33), our 36% from the field just wasn't enough to erase the deficit. It also didn't help that we were giving the bal away. About half of our 15 turnovers were a result of poor passes, several of which found their way into the stands. And it wasn't even JuJu's fault. We're talking vets like Posey and Peja launching balls all over God's creation.

At the end of the day, this actually was a game that the Hornets could have won (or at least come close to winning). Am I upset that we lost? A little. But I am consoling myself with the assumption that Byron is using CP's absence as an excuse to shake up the bench and find out what it's going to take to coax a better performance out of them on a nightly basis. And I really hope I'm right.

After all, we're going to need those guys to be a least sort of productive come playoff time. CP's good, but he's not that good... yet.