Some of you might remember the last time I put on my doctorial hat. Yup, the time I absolutely nailed Peja's injury, predicting it to be a "mild right ankle inversion." I can't go too much into the details of how I arrive at such insanely accurate medical prognostications, but suffice it to say it's equal parts video analysis, internet surfing, and jamming to the Bee Gees. Foolproof.

Anyways, I figure I should drop some in depth medical knowledge to the denizens of Hornets nation, ahead of Chris Paul's MRI today. First, a look at the injury itself:

UPDATE: Video's down for some reason, so a few screen grabs until it's back up: 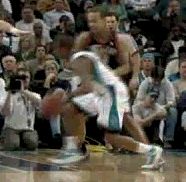 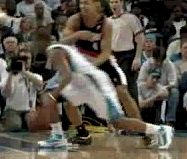 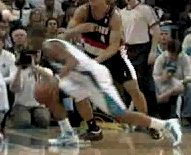 Image 3 seems to be the one with maximum extension on the leg. Right after that, he pulled up and started hopping around on one leg (while James Posey missed a 0 foot dunk on two very able legs).

And now a look at the affected area, via a great picture I stole once drew in my extensive studies overseas. 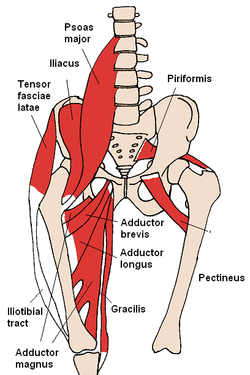 The "adductor longus", cleverly labeled as such above, is the muscle that connects the groin to the thigh bone. According to WebMD, a sprain of this muscle "occurs when the leg is pulled outward, causing the muscle to overstretch." Referring back to the video above, that's pretty clearly what happened to Chris. The leg is pulled outward due to one foot being flattened against the ground and the rest of the body moving forward.

Rotowire reports that CP3 will be getting an MRI this morning, not an X-ray. According to WebMD, this means that they'll be looking for internal bleeding in the groin/thigh area as opposed to bone damage. Which I suppose has to be a good thing. Anyways, my final diagnosis would be a Grade 2 pull of the adductor longus muscle (where Grade 1 would have been shake-off-able and Grade 3 un-walk-able). I'd be surprised if he played Wednesday... but hey, that's why we signed Devin Brown!!!