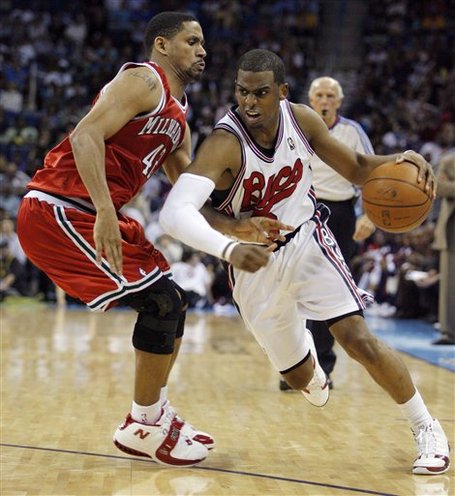 Tonight featured the Hornets in throw-backs, so technically we had the first Bucks/Bucs matchup in league history. I'm sure there were announcing problems all over the place for the TV and radio guys. Regardless, it was an exciting game right down to its nail-biter of a finish.

Actually, it was a little too close for comfort for my tastes. After leading the game by double digits for most of three quarters, the Hornets all but watched idly in the fourth as Milwaukee cut the deficit and took the lead, only to then lost it in the final 10 seconds. I was just waiting for the headlines to read "Hornets waste Paul's 20 assist night against short-handed Bucks."

The Hornets entered the fourth quarter with a 14 point lead. Confident in our odds of winning, Byron opted to sit CP (certainly reasonable). The team then reacted by waiting a whole 4 minutes and 20 seconds before making a shot from the field, at which point CP promptly re-entered the game. Even still, the Hornets continued to struggle and finished the quarter with an anemic performance of 5 for 13 with only 20 points to show for it.

Meanwhile, the Bucks went into pyscho mode, draining 7 treys and finishing the quarter with 33 points on 11 for 22 shooting. Charlie Bell alone notched down 11 points in the final 2:10. Eleven! Three treys and shot from the key. Amazing.

So where did it all (almost) go wrong? What made us fall apart at the seams? Honestly, it's difficult to tell. The easy explanation is we got cold and they got hot. Honestly though, most of our shooters were off all night. They had plenty of open looks (Paul was on fire with the passing... not so much the shooting), but they couldn't knock them down. The Hornets were downright awful from deep, going 4 for 21.

But we were able to offset that deficiency with our successes from inside the arc. In fact, all but one of CP's assists went to 4 players: DX, Tyson, Butler, and Marks. The lone remaining dish went to Peja (who made CP's only assisted trey).

Our other problems: taking care of the ball and finishing up around the rim on missed shots. The Bucks took the edge in the former, giving away 10 to our 14. And, despite a significant edge in total rebounds, the Hornets only tied the Bucks in offensive rebounds, and trailed 14 to 6 in second-chance points. That edge ended up being pretty huge considering the way the game finished.

Composed to: The Complete Louis Armstrong and Duke Ellington Sessions