The Seventeen Feet of the Assassin

Share All sharing options for: The Seventeen Feet of the Assassin

With NBA.com's shooting data, we can take a look at where exactly West takes his shots from. On this first picture, I've just labeled each of the fourteen areas of the floor by number. When I refer to a floor area later on down, just hop back up here to see what I'm talking about. 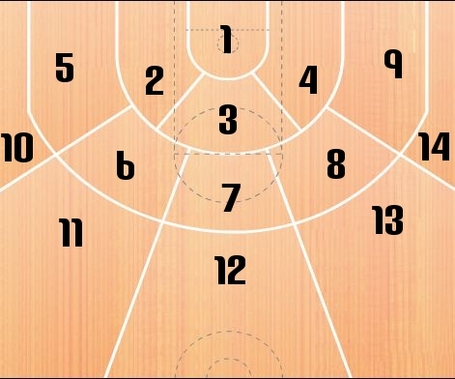 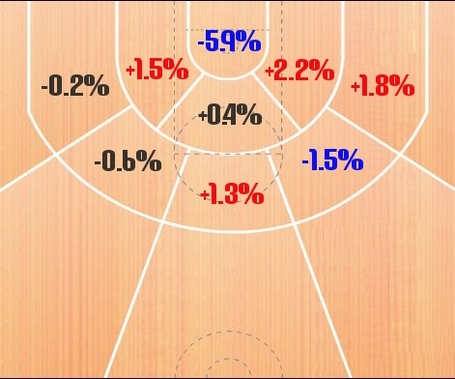 Two trends are immediately obvious. First, a large portion of shots attempted in Area 1 in 2007-2008 has shifted to Areas 2 and 4 this year. A large number of DX's "easy" shots have been moved out of the 1 foot-4 foot range and into 5 foot+ territory. Even when West's decline in offensive rebounding percentage is normalized for, the disparity is still substantial.

In actual baskeball terms, it indicates that West has favored pulling up for a 5 footer this season instead of taking it in all the way as often as he did last year. But why? The obvious explanation would be West wanting to get blocked less. The statistics don't support that notion though. West has been blocked on 9% of his "inside" shots this year (defined as Areas 1, 2, 3, and 4) compared to 8% last year.

This is where it starts to get strange. Common sense dictates that the closer you are to the hoop, the more likely you are to get fouled. It's basic probability; it's more likely that 3 defenders will collapse right at the hoop instead of at a spot 6 feet from the hoop. However, as I've mentioned many times on here, DX is drawing fouls at a career-high rate, easily dwarfing last year's FGA/36. Maybe something West does at the 4-5 foot range allows him to draw fouls more easily than closer in. I will definitely be watching West more closely in that range, because something is going on.

The more interesting point is this: while we've all lamented West's lowered effective field goal percentages (48.4% to 46.7%), the data suggests that increased foul drawing ability is inversely related to eFG% at close range. It's a very interesting proposition, one that may very well exist at a league wide level.

The other trend is the siphoning of Area 8 attempts into Areas 7 and 9. The ramifications of the redistribution are not immediately apparent, but a look at Area field goal percentages reveals more. Once again, this next picture is difference between 2008-2009 and 2007-2008. Red indicates "good" and blue "bad." 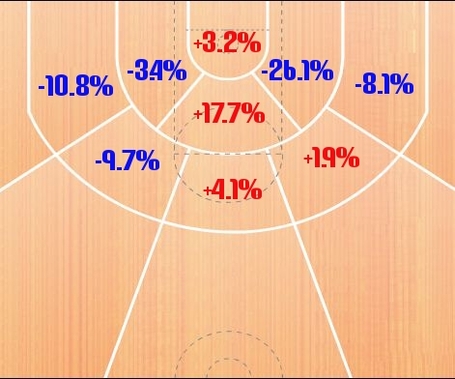 First of all, the drop-offs are staggering. It translates to about a 3% fall off on the jumper and almost 2% overall. But as Hornets fans, you were probably expecting something along these lines anyway.

The real story comes when we reference the previous shot chart. Remember how Area 1 shots were being pushed to Areas 2 and 4 this year? Look at how diminished the field goal numbers are for both those regions. Ironically, West has become a substantially better finisher in Area 1, but now takes signficantly fewer shots there.

One trend that has become clear over West's career is that he shoots progressively better, the more straight-on to the hoop his shot is. DX is a poor shooter from Areas 5 and 9; last year he barely scraped 40% from each spot. This year he's at 31% and 32% respectively. This is why the siphoning of shots from Area 8- a region he's not awful from- into Area 9 is doubly damning.

Observationally, I think it's pretty clear that Areas 6, 7, and 8 correspond to where West is assisted most often. The Chris Paul pick and pop almost exclusively leaves him in one of those three regions, with the odd Area 5 or 9 coming rarely. The flip side is most West iso's come in 5/6 and 8/9. So the floor percentages would seem to contend that posting up West as far from the basline as possible yields the best odds. Not only would that leave him in a more natural shooting area of the floor (6 opposed to 5 and 8 opposed to 9), it also leaves open the option of shooting from Area 3 as opposed to Areas 2 or 4.