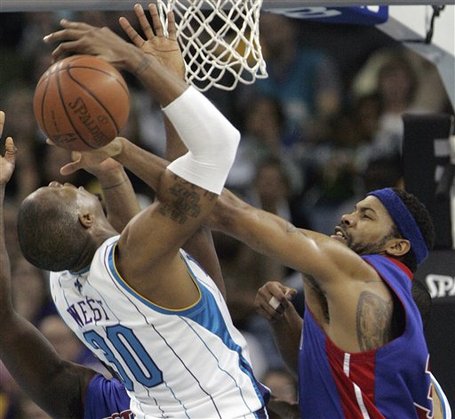 Got the W. Sure, it was a little closer than I'd have liked to see, but we notched the victory all the same.

The Hornets jumped out to an early lead, winning the first quarter by 9. Unfortunately, Allen Iverson left the game late the first with a stiff back and never returned. I say "unfortunately" due to the fact that the Pistons (and most teams since the Sixers of the late 90s) are more efficient without Iverson on the court.

By halftime, the Pistons sliced the deficit to 1, thanks to hot hands from Rip, Wallace, and McDyess. Rip was especially problematic since he was able to outrun Butler on almost every screen the Pistons set. Poor Rasual was showing up as the ball was tickling the twine. Fortunately, Rip started acting more human, forcing the Pistons to run some different offensive sets.

An even third quarter didn't seem to advance the storyline; however, the fourth proved to be much more dramatic. The Hornets caught a break about five minutes in as Sheed picked up 2 techs in roughly 30 seconds, and his last foul had actually put the Pistons over the limit. The ejection would seem to have shifted the momentum to the Hornets, but credit the Pistons for making a strong showing to the bitter end.

The real difference tonight came on the boards. The Hornets put the Pistons to shame, outrebounding them 51 to 38 (not to mention a 17 to 8 advantage on the offensive glass). The catalyst? A healthy Tyson Chandler who played 37 minutes and pulled down 17 rebounds (7 of them offensive).

And believe me: it was a pretty site to behold. See you guys Friday.