Blurgh. Whatever. Hard to feel bad when you have zero expectations. 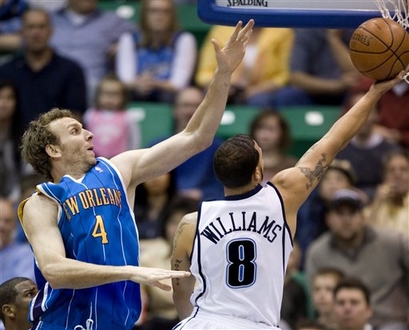 The fact that we're a playoff team and had zero expectations going into a game says a lot. The Utah Jazz just destroy us. Forget fatigue for a second, forget who was playing and who wasn't. The Jazz simply have our number. It's a combination of good individual play, good defense, good coaching... good everything really. I wouldn't be surprised if they swept a playoff series against us.

The stats are above. We lost this game due to turnovers, poor transition defense, and not closing out shooters (all of which you could blame on fatigue theoretically). But those are faults specific to this game. We've lost 7 out of 8 to Utah, most in spectacular fashion. So instead of looking at this game specifically, I think I'll go in a different direction: why do the Utah Jazz eat us alive?

I posted a picture of Paul and Williams in the game thread. If we've learned one thing from these matchups, it's that New Orleans-Utah is all about the players not wearing #8 and #3. Williams' supporting cast easily outclasses Paul's. It's not close really.

Kyle Korver is essentially Peja Stojakovic, minus the huge salary. As good as Rasual Butler has been this year, he's essentially been exactly equivalent to C.J. Miles... who's a backup to Ronnie Brewer. And Brewer is significantly better than Butler. I'd give David West a very slight edge over Okur, but the gap is really, really small. Both teams are missing valuable bigs (Chandler defensively, Boozer offensively).

Then you get to the bench, assuming health. Paul Millsap is lightyears, billions and trillions of lightyears ahead of Hilton Armstrong. They shouldn't be mentioned in the same 600 page novel. For all the hype James Posey gets, Andrei Kirilenko is, at the very worst, his equal on defense. He dwarfs Posey in terms of offensive contributions. Brevin Knight and Ronnie Price aren't too much of a step down from Antonio Daniels. Matt Harpring is Ryan Bowen, if Bowen was league average at basketball. And we haven't even gotten to Kosta Koufos (who is currently showing more promise than Julian) or the fact that Utah has two spare seven footers lying around on the bench.

At this point in the careers of Paul and Williams, it's very clear- observationally and statistically- who the better player is. You won't find anyone outside of SLC arguing against #3. But focusing on this matchup obscures what actually happens when the Utah Jazz play the New Orleans Hornets. All this is to say nothing of the Jerry Sloan vs. Byron Scott matchup (I don't think I need to explain where I stand on this).

We can and should chalk this one up to fatigue, injury, whatever. But at the end of the day, there's a major underlying disparity in terms of talent and coaching. As we look ahead to an easier schedule and how a Lakers-Hornets matchup might play out, it would be foolish to lose sight of that gap.