So I made my bi/tri-annual trip to Staples Center to watch the Hornets tonight. We "lost" the game, but does this give us hope for the rest of the season or what? 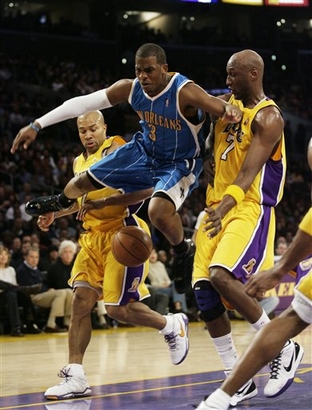 The reason I say "lost," obviously, concerns how the 4th quarter ended. Up by 3, 20 seconds left, Chris Paul leading a three on one. From my vantage point, I couldn't tell if it was a charge or not. Judging from the comments here on the game thread (thanks for holding that down guys), it was.

Either way, it was a fluke ending to an awesome game by the Hornets. We battled back from a double digit deficit, took the lead, and absolutely stifled Kobe. Chris Paul makes that mistake maybe once in a thousand tries. It happens. ESPN can talk all it wants about how Kobe "dominated" this game. The fact is, we came to Staples Center minus our best defender and had the game in hand.

Some bullets after the jump.

That's it. I'm probably forgetting a whole bunch of stuff, but whatever. Utah tomorrow, where I'll be happy if we manage to lose by single digits...